Welcome to a series of articles rounding-up the very best restaurants in London for specific cuisines. We’re not talking authenticity here, rather the kind of food we really love to eat. Rounding up Indian food is particularly tricky: not only are there countless regional variations, but their styles also range widely from dishevelled curry houses to high-end Michelin-starred spots. While we rate good value highly, on the flip-side some places are so good that they are worth saving up for. As ever, please do let us know what you think of our selected restaurants (as well as where we missed out) in the comments below.

Long before Brockley Market took hold, this 29-year-old Indian was the foodie face of the neighbourhood. Creative dishes such as clove-smoked lamb chops and tamarind-glazed quail are signatures, while the kitchen’s careful sourcing and delicate cooking of high-quality meat, fish and game really sets it apart. Big flavours come together rather than overpower each other, and suggested wine and beer pairings are given for each dish to ensure drinks do the same. A contemporary light and airy setting complete with modern art also bucks the curry house trend.
Babur, 119 Brockley Rise, SE23 1JP 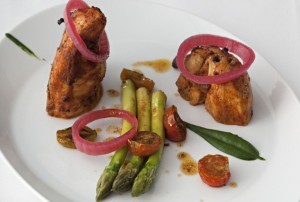 Atul Kochhar was the first Indian chef in the world to receive a Michelin star, gained while he was working at Tamarind restaurant (see below). When he left, he opened up this similarly high-flying restaurant just down the road and achieved the same accolade in 2007. Benares continues to turn out contemporary classics such as Indian lobster cocktails with chilli cress, and chicken tikka pie with berry compote, while Kochhar is well on his way to being a top TV chef. Be prepared for large prices and less large portions, though.
Benares, 12a Berkeley Square House, W1J 6BS

There’s no modesty in the name, and little subtlety in the glitteringly glitzy dining space, but perhaps there doesn’t need to be. Brilliant is probably the best Indian restaurant in one of London’s largest Indian communities, and it’s been doing good business for more than 40 years now. Excellent Punjabi cooking is the reason for that, with elaborate spicing, expert grilling and good ingredients all coming into play. A touch of extra interest is added to the menu by the owners’ Kenyan roots (cassava makes a few appearances), but it’s no game changer. Put simply, it’s just brilliant at what it does.
Brilliant, 72-76 Western Road, UB2 5DZ 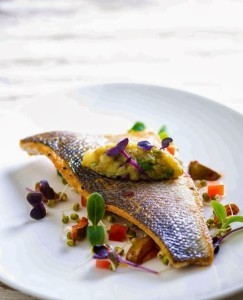 Housed in a Grade II listed old Victorian library, Vivek Singh’s Cinnamon Club makes an immediate impression. The food has no problem living up to it either; high quality ingredients, intricate spicing and precise cooking lead to elegantly presented dishes that boast layers of developing flavour and pleasantly contrasting textures. A pan-seared sea bass fillet with a spiced breadcrumb crust, curried chickpeas and chorizo is exemplary of the kitchen’s fusion-minded approach to Indian food and it really does work. If the steep prices put you off, the City’s Cinnamon Kitchen and Carnaby’s Cinnamon Soho are more accessible.
The Cinnamon Club, 30-32 Great Smith Street, SW1P 3BU

Following the success of the original Bombay café-styled restaurant in Covent Garden, there’s now another outpost in Shoreditch, and one more on the cards for King’s Cross. Bhelpuri, birianis, keema and deep-flavoured black dahl are signatures worth trying, while the buzzing (and usually bustling) atmosphere is reason to come again and again. A cheesy naan couldn’t be more comforting (or booze-absorbing), while the next morning a bacon naan is the ultimate hangover-buster.
Dishoom Covent Garden, 12 Upper St Martin’s Lane, WC2H 9FB

Don’t let garish colours, neon lights and a pesky TV screen put you off. What this South Indian and Sri Lankan eatery lacks in atmosphere it makes up for with cooking. The namesake components are particular highlights (the crisp, slightly chewy dosa are surely among London’s finest), while vegetarian curries — such as the rich and fragrant paneer korma — are also a speciality. The pleasingly sour and spicy Chettinad fish curry is worth a try, while the still-warm freshness of the popadoms and naan breads provides the icing on the cake.
Dosa N Chutney, 68 Tooting High Street, SW17 0RN 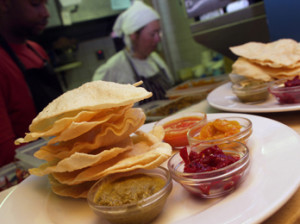 Inspired by the street food of Southern India, Ganapati excels in bright-flavoured dishes that match the colourful, bohemian surrounds of this unique off-the-beaten-track restaurant. Vibrant fish curries laced with coconut milk and stuffed dosas are strong points, while even the requisite poppadoms are enlivened by homemade chutneys and pickles. Lime, coriander, ginger, tamarind and garlic take starring roles in place of too many dried spices, in dishes to be eaten at large communal tables: think English country kitchen goes to India. There’s a decent range of cocktails and beers, and a number of Indian wines make the drinks list, too.
Ganapati, 38 Holly Grove, SE15 5DF

Decked out like a colonial polo club from the days of the Raj, Gymkhana is a tongue-in-cheek but seriously slick operation. It kicks off with Indian punches and cleverly spiced cocktails at the bar and keeps running through to a decadent carrot halwa tart dessert. Dishes such as a rich venison biryani and a sharp, well-rounded vindaloo made with slowly-cooked pigs’ cheeks are fine examples of classic curry house fare taken to blinding new levels. Add accomplished, friendly service and it’s no wonder that it was recently crowned at the National Restaurant Awards 2014. Prices are more than reasonable given the quality and location, too.
Gymkhana, 42 Albemarle Street, W1S 4JH 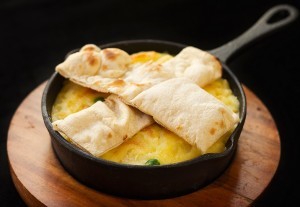 It was a nephew of Mohammad Tayyab (who founded Tayyabs restaurant in Whitechapel) that was responsible for bringing us this similarly-minded outpost around the corner more than 40 years ago, and much more recently a branch has opened in Streatham too. As at Tayyabs, the grilled lamb chops are legendary and an absolute must-try: charred on the outside, gently spiced and a tender pink within. Stick with lamb in the form of juicy minced kebabs or a dark, richly-spiced dry curry, but there’s little to go wrong with the chicken, fish or vegetable options either. You just might have to ignore the big screens if Bollywood hits aren’t your thing.
Lahore kebab House Whitechapel, 2-10 Umberston Street, E1 1PY

This BYO spot just around the corner from Tayyabs (see below) was opened in 2009 by a former manager there. While it has nowhere near the reputation or footfall of Tayyabs, the food it offers isn’t far off. The lamb chops in particular are beautifully succulent and tantalisingly spiced, and anything grilled or meaty tends to be a good bet. The haleem here is also exemplary and the naans are fluffy and light. This is a particularly good place to know about if you forget to book ahead and just can’t handle the Tayyabs queue.
Needoo Grill, 87 New Road, E1 1HH 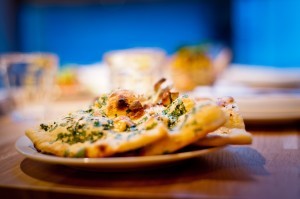 A vast all-you-can-eat buffet is the mainstay of this South Indian and Gujarati restaurant where loud Indian music sets a fun tone. And at £15.50 for unlimited food and soft drinks of an evening, it’s easy to see why it’s popular. A full menu is also available, offering excellent bhel puri and richly flavoured dhal alongside all manner of curries and some particularly stand-out Indo-Chinese dishes.
Sakonis, 127-129 Ealing Road, HA0 4BP 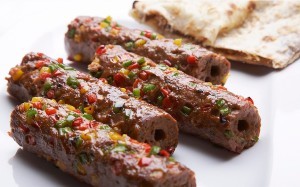 This restaurant will always have a place in history: when it opened in 1995 it was the first Indian restaurant to embrace fine-dining, and it later became the first Indian restaurant in the world to gain a Michelin star. All these years later, it’s still got it. The setting is somewhat stuffy and the prices are high, but the carefully-spiced food is endlessly decadent, elegant and intricate. For equally skilled cooking in less formal surrounds, try sister-restaurant Imli Street (see above).
Tamarind, 20 Queen Street, W1J 5PR

It had to be included. This backstreet Punjabi restaurant has been pleasing locals since 1972, and has more recently expanded in line with widespread foodie fame. It would be criminal not to try the sizzling, super-tender lamb chops, while other grilled meats are also exemplary. Bhajis, dahls, tikka and meat-rich curries don’t pale too much in comparison, and you’ll want to get in on some naans-as-big-as-your-face that are delivered red hot and slightly charred straight from the tandoor. Tayyabs is big, bustling and cheap as chops.
Tayyabs, 83-89 Fieldgate Street, E1 1JU 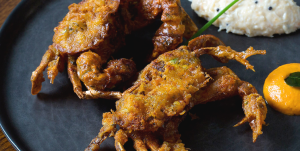 Older sister restaurant to Gymkhana (see above), Trishna may not be quite as cool at the moment but it is effortlessly elegant. Pale wood panels are evocative of beach huts, while the menu majors in fish and seafood, alongside meat, game and vegetable dishes. The experience is a lighter and fresher one than at most Indians, though a sumptuous Dorset crab steeped in butter is an unmissable indulgent signature dish that is anything but. A prawn Keralan curry is an exercise in fragrant cooking.
Trishna, 15-17 Blandford Street, W1U 3DG

We reviewed Zumbura when it opened last year, serving small plates of modernised North Indian food and some very decent cocktails to match. We liked it then but have been back since and think it’s got better still. The dishes here are all inspired by recipes from the owner’s Indian mum, but rather than feeling challengingly authentic they are fresh-faced and vibrant, full of herbs and spices rather than chilli, and presented in pickable portions on pretty plates. This is Indian cooking at its most London-y.
Zumbura, 36a Old Town, SW4 0LB