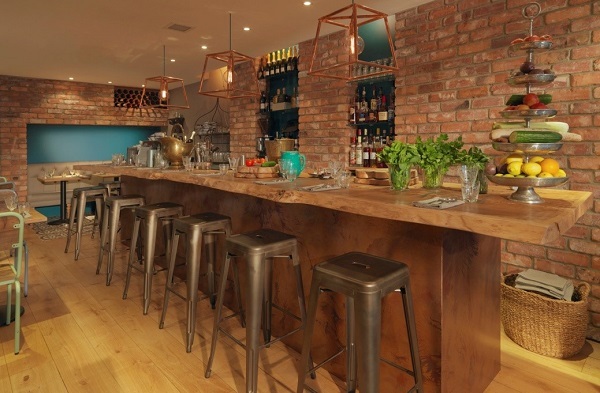 There’s lots about Zumbura which is quite exciting sounding. For a start, the cuisine it’s offering. Yes, it’s Indian, but more specifically it focuses on the Purab region of North India, which is easily one of the country’s lesser touched-on areas where London’s restaurants are concerned.

It’s also a ‘small plates’, ‘made to share’ place, which might seem a bit similar to what curry houses usually are anyway, but it does mean being able to try smaller portions of more flavours, which we’re always in favour of – especially when some dishes start from as little as £2-£3.

Zumbura’s credentials add to the expectation. It’s founded by Aamir Ahmad, Sean Galligan and David Garrett who happen to be the founders of furniture company Dwell; more significantly, they’ve drafted in chef Raju Rawat who has previously worked in highly regarded Indian restaurants Bombay Bicycle Club, The Cinnamon Club and Michelin-starred Benares. He also helped set-up the concept behind Moolis, the hip Indian wrap bar which closed its Frith Street venue earlier this year and is looking for a new site. For diners familiar with the aforementioned restaurants, it’s the fun, lively, modern and relaxed feel of Moolis that is most comparable to Zumbara.

Discreetly nestled away in Clapham’s Old Town, it’s the brightly coloured chairs and tables occupying the pavement outside which are the first nod to the restaurant’s vibrant energy. That and the disproportionate level of chat and laughter belting out of the long(ish) and narrow space. Inside, a carved wood bar, bare brick walls and filament-exposed light bulbs fall just shy of being trendily formulaic but are close enough to make it hard to believe you’re at an Indian in Clapham rather than a modern British in Soho or somewhere out East.

We find it even harder to believe we’re in an Indian when our cocktails arrive. Sounding interesting on paper, we were keen to give them a go, but had curbed our expectations on the basis of all too common a Poor Show consisting mainly of sickliness, sweetness and a twist of tacky garnish. Instead, a Bloody Spicy uses fresh chilli and coriander for a subtle twist on the Bloody Mary, and an Indian Negroni includes bourbon, aperol and cointreau in a mix that’s short, stern and not a million miles from a classic Boulevardier.

On to the food, and in a pleasant contrast to the modern surrounds, we read on the menu that the recipes served have all been passed down by generations of owner Aamir’s family, via his mum in Purab. That’s not to say you’d think it, though.

A chaat (often called a panipuri on menus) of chickpeas and flat bread, anointed with yoghurt, tamarind sauce and a punchy coriander relish is the first dish to arrive at our table, and one that turns out to represent the menu well. Light, bright, fresh and full-flavoured would be appropriate buzzwords; there’s next to no oil and - unusually for an Indian - it even feels a teeny bit virtuous. Equally surprisingly, we sample nothing that exudes more than the mildest hit of heat; we notice this only at the end, which shows we didn’t really miss it.

Highlights of the dishes that follow include Anda, a light, saucy and fresh-flavoured curry punctuated with crispy deep-fried halved hard-boiled eggs; lamb chops which are twice marinated, explaining how they manage to be unctuously moist and tender despite being more well-cooked then we’d usually opt for; and a pollock fish curry which is only slightly creamy but majors in tang thanks to a generous scattering of mustard seeds. A daal shows less desire to please, being runnier and more watery than we’re often used to, but it feels all the more raw and ready for it, becoming classic comfort food when paired with a freshly made chappati.

Authenticity-seekers will probably have a hard time placing Zumbura as it all feels a little too on-trend, fresh, vibrant and modern to conform. But if this is how a family up in Purab cooks, whether it’s truly traditional or not, then we’re not sure there’s anything to criticise about that. The lack of spice might be a deterrent for some, but where heat could occasionally be considered missing flavour never is.

We ordered a fairly greedy eight dishes between two, but didn’t touch the sides of the menu. Without drinks that would have cost us just £39.50, which quite frankly makes us want to go back and try the rest. If you’d like a go too, then you’ll find Zumbura at 36a Old Town, Clapham, SW4 0LB. Visit their website for more information and menus.