The sequel to our list of London's top cats is out of the kennel. 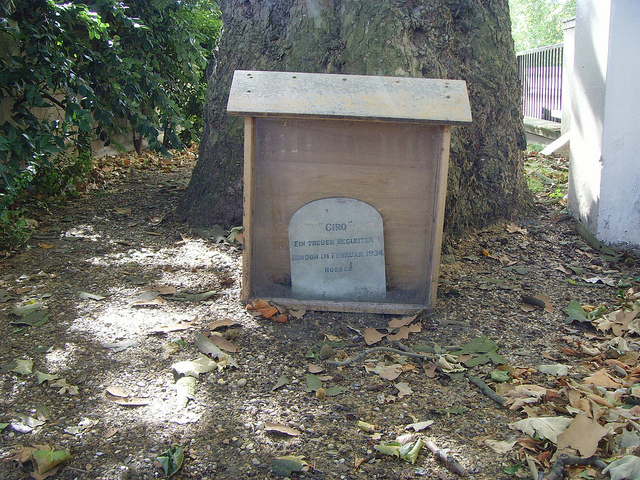 Giro, a terrier or Alsatian depending who you read, was the "true companion" of the German Ambassador during the mid-1930s. His headstone, sheltered by a crappy wood and plexiglass demi-kennel, can be found beside the tree at the top of the Duke of York's Steps, Carlton House Terrace. For the sake of a story, the hound is universally referred to as "Giro the Nazi dog". Giro's political views are unrecorded, but the sobriquet is probably unfair since his master Dr Leopold von Hoesch was no admirer of Hitler, and only represented the Nazi party by circumstance after the collapse of the Weimar Republic in 1933.

William Hogarth identified closely with his combative pug Trump. The dog features prominently in his famous 1745 self-portrait. Fellow artist Paul Sandby even depicted Hogarth as half-man, half-mutt in his satirical image Pugg's Graces. You can eyeball a porcelain version of Trump in the V&A's British Galleries, and a bronze likeness of the dog stands next to his master's statue in Turnham Green (above).

Another arty dog is Flush, the spaniel of Elizabeth Barrett Browning. The pair lived on Wimpole Street in the 1840s. Browning was so taken by the dog — a gift from Mary Mitford — that it became the subject of one of her poems, and later a book by Virginia Woolf.

The Blind Beggar and his dog

Another canine immortalised in metal, and by no lesser sculptor than Elizabeth Frink, lurks on Roman Road in east London. The Grade II* listed mutt accompanies a blind man. The duo crop up throughout East End folk lore. The former Metropolitan Borough of Bethnal Green used the device on its borough seal, for example. The Blind Beggar name is also commemorated in the famous Whitechapel Road pub where Ronnie Kray killed rival gang member George Cornell. Legend has it that the original blind beggar was Henry de Montfort the incognito son of the more famous Simon. Nothing is known about his dog, however.

Nipper and His Master's Voice 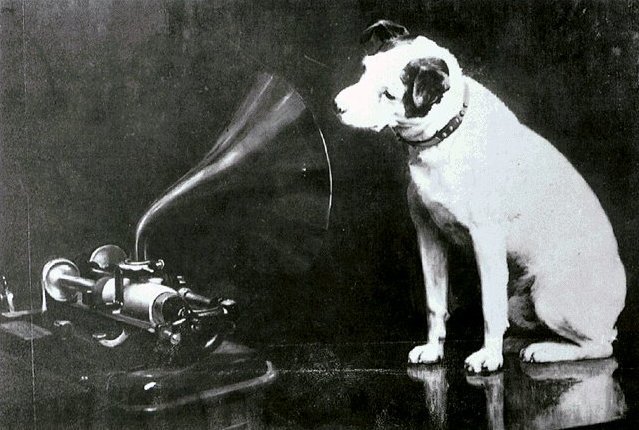 Everyone knows this famous logo of a dog listening to 'his late master's voice' on a gramophone. The hound is 'Nipper' (1884-1895), and he was painted by Francis Barraud, brother to the late master, Mark Henry Barraud. A few years after the dog's death, a modified version of the painting was sold to the Gramophone Company and subsequently became the logo of HMV and related brands. Nipper was buried in Kingston Upon Thames beneath what is now Lloyds Bank. The little woofster enjoys the unusual distinction (for a dog) of having a local alley named after him.

In the same way that Sherlock Holmes would top a list of famous detectives, and Harry Potter would head a column of wizards, the most famous of London canines are purely fictional. Dodie Smith's much-loved book, and the even-more-loved Disney adaptation of 1961 tell the tale of a posse of north London dalmatians kidnapped by the fiendish Cruella de Vil. Much of the early action plays out in and around Regent's Park, as this guided walk will show you.

The brown dog of Battersea 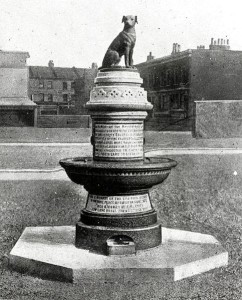 Battersea Park once had a problem with anti-doggers — not a moral army crusading against sexy encounters, but a group of protesters determined to rid the park of its dog statue. The row went something like this. In 1903, UCL lecturer William Bayliss supposedly vivisected a brown dog using inhumane methods. He denied this, and successfully sued his accuses. But anti-vivisectionists erected a monument to the dog in Battersea Park. Medical students and supporters of animal experimentation disliked the statue and regularly vandalised it. The so-called "Brown-dog riots" saw clashes between the anti-doggers and anti-vivisectionists. Finally, the local council removed the provocative statue and reportedly melted it down. 70 years later a replacement was erected by anti-vivisection groups and remains there today. The whole tangled story is well covered on Wikipedia.

The Dogs of Alcibiades

Once weatherbeaten and vandalised, these recently restored (actually, replicated) fellows guard the Bonner Gate of Victoria Park. The duo are modelled on ancient Greek originals by Myron of Eleutherae (480-440 BC). They're notable for three things. (1) They're now over a century old. (2) They have freaky genitals. (3) One of them featured on the front cover of Iain Sinclair's Lights Out For The Territory.

March 1966, four months before the World Cup, and the fabled Jules-Rimet trophy was stolen from an exhibition at Westminster Central Hall. Luckily a south London collie named Pickles was on the case. He discovered the trophy, wrapped in newspaper, beneath a hedge in South Norwood. The unlikely hero went on to star alongside Eric Sykes and June Whitfield in the film The Spy With The Cold Nose, and was voiced by Harry Enfield in a recent TV drama. Sadly, Pickles choked to death a year after his great find, prompting some to hint at a darker side to the recovery.

The Black Dog of Newgate

The spectral hound that supposedly hangs out round the back of the Old Bailey is one of London's most famous ghosts. The phantom has been sighted on many occasions over many centuries, skulking along a brick wall in Amen Court. The ghastly form, which is accompanied by a vile smell, is said to be the spirit of a 13th Century sorcerer, whose body was desperately eaten by the starving prisoners of Newgate. The dog's bollocks for tour guides, but 'this dog is bollocks' for anyone with a rational mind. For similar reasons, we don't have a photo.

OK, admittedly we're struggling a bit now.  The long-suffering canine companion of Oliver Twist villain Bill Sikes has little to recommend him. Suffering "faults of temper in common with his owner," the bull terrier has one redeeming feature. Despite running away from Sikes, who was intent on drowning him, Bull's-eye remains faithful to his monstrous owner, hurling himself from a Bermondsey rooftop after Sikes accidentally hangs himself from the same.

Images: Giro grave by binaryghost in the Londonist Flickr pool, other images in the public domain.