LONCats: The Top 10 Cats Of London

Bob the ginger cat hangs around Angel Tube station with owner and Big Issue salesman James Bowen. The pair have now found wider fame with their first book, A Street Cat Named Bob, which chronicles their adventures, hopes and fears. The Evening Standard declared that Bob "has entranced London like no feline since the days of Dick Whittington". Which gave us paws for thought about London's other famous cats. In no particular order.

Four-times Lord Mayor Dick Whittington is inseparable from his cat in popular imagination. Unfortunately, there's no clinching evidence that the moggy existed outside the pantomime tradition. Still, the nameless cat is enshrined in two statues (that we know of) in London: one on Highgate Hill and another outside Guildhall Art Gallery. 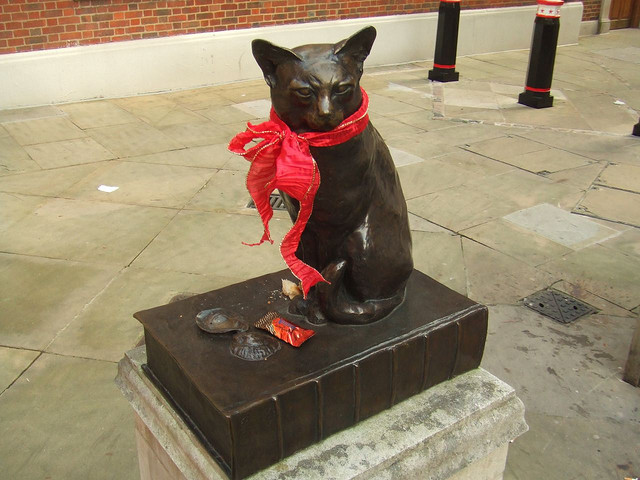 Samuel Johnson's beloved pet can be found immortalised in bronze outside the great lexicographer's house in Gough Square. The good doctor would make special trips to buy oysters for the beast, and the modern likeness of Hodge stands beside a pair of empty oyster shells, revelling in the inscription "A very fine cat indeed". 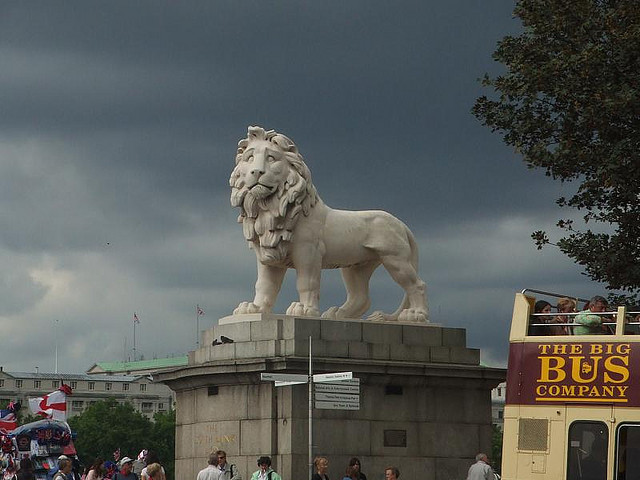 The most photographed cats in London have to be the four Trafalgar Square lions, sculpted by Edwin Landseer and unveiled in 1867. Climbing all over the lions is an ages-old London tradition for children, a potentially dangerous activity that patrolling wardens happily turn a blind eye to. Another proud beast guards the eastern end of Westminster Bridge. Made of Coade stone, the felid once topped the long-demolished Red Lion Brewery. After a sojourn to Waterloo station, the lion was erected next to County Hall in 1966.

Incredibly, Valerie Colin-Russ has identified 10,000 different lion sculptures around London. We'll be reviewing her new book, London Pride, in the near future. 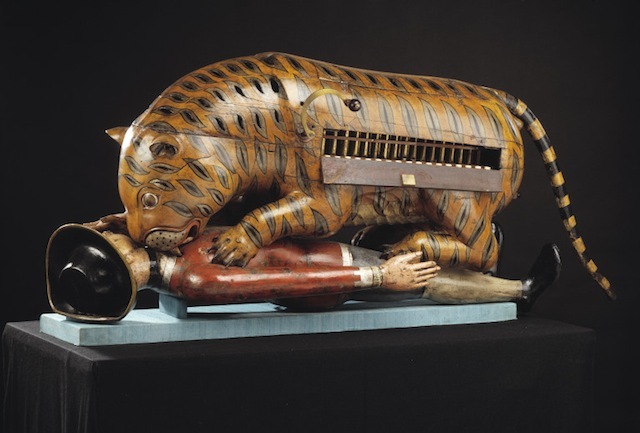 Well, now we've included big cats, we have to mention Tipu's Tiger, one of the V&A's most famous, and unusual, exhibits. The bizarre sculpture dates from around 1793, and shows a life-size tiger mauling a fallen European. Still odder, the piece conceals a mechanical pipe organ that simulates the cries of the unfortunate man and the growls of the tiger. Oddness.

Faith, the church cat of St Augustine's (the tower of which still stands next to St Paul's Cathedral) is said to have predicted the Blitz. A couple of days before the aerial onslaught began, the cat set up a nursery (or whatever cats call them) for her newborn kitten in the basement of the church, refusing several times to remain in the cosier ground-floor quarters. The Blitz began, the church was razed, but subterranean Faith and her kitten survived thanks to the supposed premonition. The cat later received a silver medal for bravery. 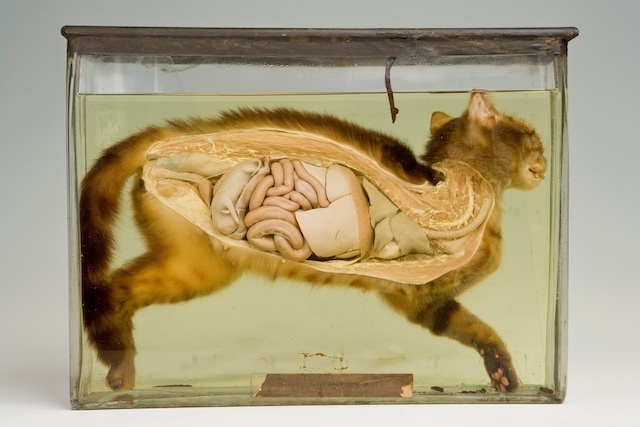 A personal favourite, this, from the staunchly macabre Grant Museum. The image speaks for itself. 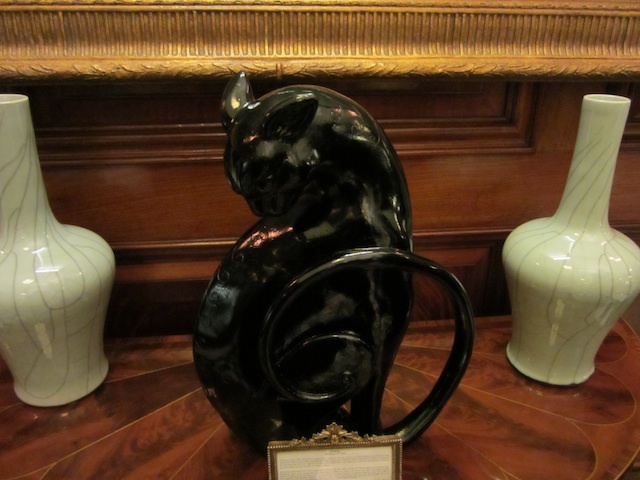 For much of the day, Kaspar the cat skulks around the reception area of the Savoy. But should a party of 13 wish to dine in the restaurant, the wooden puss is called to the table and placed in the fourteenth chair, where he's furnished with a napkin and provided with every course. The superstition-busting cat was specially carved for the hotel in 1926 by Basil Ionides.

The cat with the longest Wikipedia entry in our list is this former Chief Mouser to the Cabinet Office. Humphrey served under three prime ministers (Thatcher, Major and Blair), retiring in 1997 after an alleged rift with Cherie Blair. The cat had a turbulent time at No. 10, accused (and later exonerated) of killing some robin chicks, savaging a duck in St James Park, and disappearing for a few days (presumed dead) in 1995. The retired beast died in 2006. His role is now fulfilled by Larry. Other important London mousers are discussed here.

9. The cats of Cheshire Street 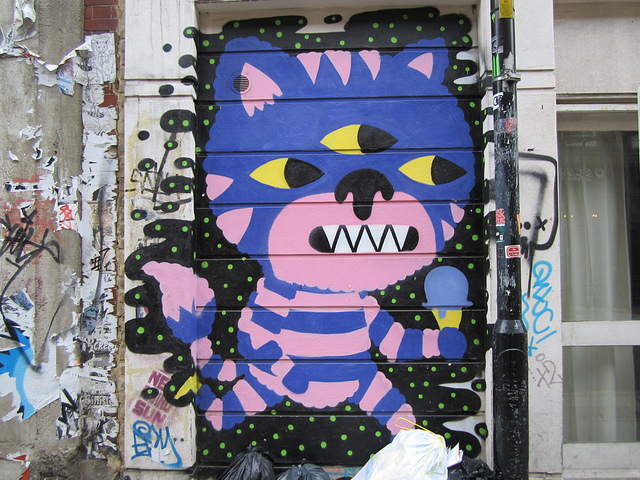 The East London thoroughfare contains a rich and varied population of street art cats by various artists. Here are two of the more prominent. 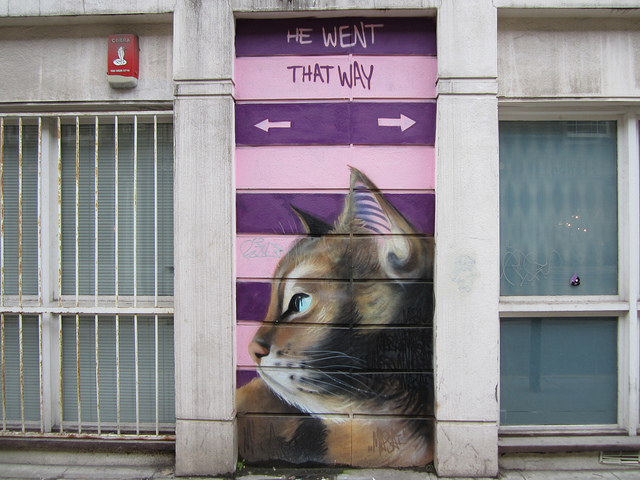 The British Museum has one, natch. This site claims that a mummified cat once graced the upstairs bar of the now defunct Tiger Tavern (but, then again, it also reckons Elizabeth II was imprisoned in the Tower). Sir John Soane's Museum definitely contains two mummified cats. Finally, a mummified cat was discovered in 1949 inside the church of St Michael Paternoster in the City...burial place of Dick Whittington. Which kind of brings us full circle.