Our monthly guide to new books about the capital. Buy them from your local bookshop. 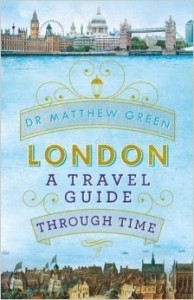 London: A Travel Guide Through Time, by Matthew Green

Visiting London? The usual travel guides are so limited. Yes, they'll list out the well-known hotspots for afternoon tea or West End theatre. But where does one go to watch a joust or a bear fight? How should you behave when entering a Victorian pornography shop? Where can you hire a sedan chair to carry you across town? What are your chances if you develop buboes?

Clearly, there's a gap in the market. Matthew Green leaps into it with the fervour of an anchorite to his cell, or a lunatic into a plague pit — both characters we meet along the way. The travel guide bounces through time, but not in chronological order. "Where would be the fun in that?" asks the author. We start in 1603, Shakespearean London, a brash, bloodthirsty place to the modern time-traveller. But then we're drawn back to medieval times, and then the plague year of 1665. It soon becomes clear that London can be a dangerous place in any era, with a ruction or rabble round every corner.

The city can also be a lot of fun. Green's forte is the unique jocundity of the Georgian coffee house (you may have been on one of his real-life coffee tours). Unlike a modern Starbucks, these were spaces brimming with repartee, places in which you would be encouraged to speak to your neighbour and to share the latest gossip with the whole room. Why hasn't someone revived the concept?

Other chapters take us to Victorian London, and the 1950s. This latter section percolates with detail. The old stereotype of a grey, crater-strewn city devoid of excitement is countered with numerous examples of cultural sparkle, with characters like Mary Quant and Alexander Plunket Greene pre-empting the Swinging Sixties. And, yes, innovative coffee shops play a part here too.

It's a sizeable tome, yet written with such a storyteller's flare that the pages whizz by like a hover-converted Delorean. Our one hang-up is the relatively clustered choice of time periods. Only the most recent third of the city's history is explored. It would have been fascinating to walk around Anglo-Saxon Lundenwic or Roman Londinium, even if much would be speculation. A chapter grappling with the tribes of the Thames Valley, who lived here before urbanisation, would have been particularly adventurous. And how about a stab at navigating future London? Perhaps there's a spicy sequel in the making (are you listening, Penguin?). In any case, London: A Travel Guide Through Time is easily the most engaging social history of the capital since the books of Liza Picard a decade ago. Book of the month.

Buy direct from the publisher, and try this guided walk by the author. 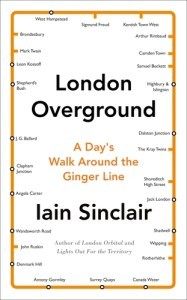 What's it like to walk all the way around the London Overground's main circle in just one day? Some small hint is given in this temptingly jacketed volume. But only a small hint. While the author does indeed complete the orbital in one long trek, his direct experiences are not the main thrust of the book. Instead, location is used as a springboard to reflect on the lives and works of various artists and literary types. Sinclair's forte has ever been to tease out the genius loci, rather than the locus itself. He is the master of the supertangent.

The usual Sinclair cast of niche artists and obscure film-school buddies are present but footnoted (with the exception of filmmaker Andrew Kötting, who shares the trek with Sinclair). His subjects here are close to mainstream. Whole chapters on JG Ballard (Shepherd's Bush) and Sigmund Freud (Finchley Road) are a delight, while the section on Angela Carter (Clapham Junction) is both moving and an inspiration to read (or re-read) her novels.

As with all Sinclair's non-fiction, the intense literary style will not be to everyone's immediate taste. Stick with it, though, there's more originality and insight here than almost anything else on our bookshelf. 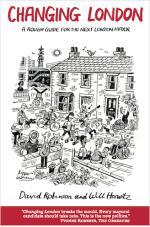 Changing London, by David Robinson and Will Horwitz

We've written before about Changing London: it's a scheme designed to get Londoners talking about what they want from the next Mayor. Anyone could send in a suggestion for a way to make the city better, and now this book pulls them together. Billed as a 'rough guide for the next London mayor', it's not aligned with any one party but it is unabashedly progressive in nature. But whatever your political persuasion we don't think anyone can fail to be inspired by the opening chapter, which argues for a move away from tribal politics and small thinking, and towards a mayor who would use the bully pulpit to start national conversations about ethical and social issues that could improve the country, not just London.

Topics cover childhood, good neighbourhoods, inequality and fairness, health and expanding London's democracy and accountability. Ideas range from the vastly idealistic to the small and practical; there's bound to be several suggestions that make you nod and think 'yes, I could do that'. Hopefully the politicians are also listening.

Buy the book direct from the publisher. 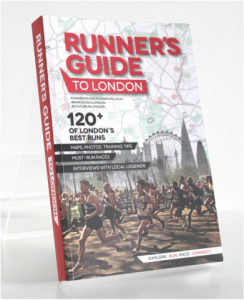 Jogging around the capital isn't just an inexpensive way to keep fit, it can also be a smart way to explore our diverse city. That's the thinking behind this neat book, which presents over 120 runs around London. The guide naturally focuses on the greener parts of town, with most routes tracking through parks, open spaces and along canals or rivers.

Such a guide could have taken the lazy way out, sticking to the central parks and towpaths. It's a real joy to see so much of the book exploring outer London. We eliminated all forms of exercise from our fitness regime long ago, but this book inspires us to dust off the trainers, and get out to Cranford Country Park, Farthing Downs or the Cray Riverway. The book also includes training tips, a list of London running clubs and a challenge to run every borough.

Buy the book direct from the publisher.

The Photographer's Guide to London by E Bowness

If jogging's too strenuous, perhaps try this camera-wielder's guide to the capital. Over 50 particularly photogenic sites are covered, from the obvious (St Paul's, Trafalgar Square...) to the not-so-obvious (Poplar DLR bridge, Leake Street tunnel...).We're told where to stand for the best shots, with tips on lighting, angles and even dealing with security guards. As you'd expect, the book is richly decorated with inspirational photography throughout.

The Barbican, Architecture and Light, by Alan Ainsworth

The Barbican complex is London's ultimate example of Marmite architecture. Some find the massive chunks of concrete and bewildering walkways an alienating proposition. Others delight in this unique architectural experiment. Alan Ainsworth might just change a few minds from the latter to the former camp with this excellent collection of black and white photographs (preview here). The Barbican is revealed in all its clandestine beauty, light and shadow accentuating sharp angles and subtle curves. These powerful shots are accompanied by a captivating series of essays exploring the form and history of the complex. Even if you still don't like the Barbican, you have to agree that "the concrete is bloody well done".

Only in London, by Duncan JD Smith

'A guide to unique locations, hidden corners and unusual objects,' is the subtitle. It's not exactly a new concept — 'unusual guides' now being more 'usual' than the mainstream guides they seek to counter. Still, author Duncan JD Smith knows his stuff. He's selected more than 100 locations around town (mostly central and north of the river), all of which harbour peculiar stories or features. Much of this stuff will be familiar to the more curiosity-driven Londoner, but there's plenty of meat here for those who've yet to discover the city's idiosyncrasies. Smith also goes into greater depth than most such guides, so this is a good place to start if you don't already have an alternative guidebook.

365 Reasons to be Proud to be a Londoner, by Richard Happer

You can pretty much guess the format of this book from the title: a daily nugget of Londony goodness to make you feel proud. What seems like a throwaway gift book actually has some depth. The entries are well-compiled, well-written and often covers obscure but fascinating events from the city's past. Typical topics include odd innovations, first occurrences and a spot of streaking on Cheapside.

Reviews by Matt Brown, except Changing London by Rachel Holdsworth.