We know, we know, we're Londonist and this isn't in London. Sometimes we like to show you interesting places to go and things to do that are a little further afield. For more things to do near London, take a look at our day trips from London page. 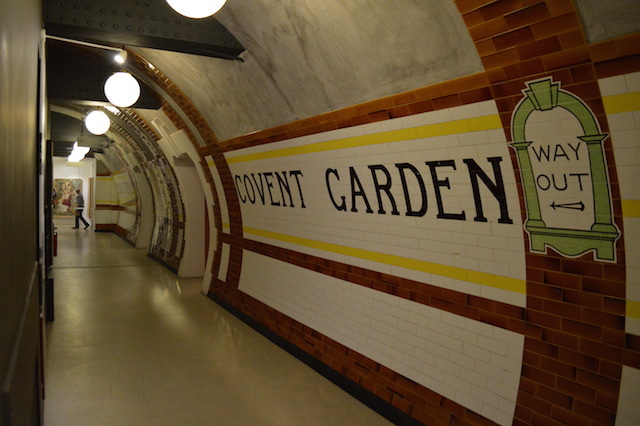 Where's this? It's not in Covent Garden. It's not on the tube network. It's not even in the capital.

London Underground is famed for many things: the tube map, signal failures, gaps to mind, werewolves... Among its more positive attributes are the glazed tiles that decorate some of its platforms and station buildings. But did you ever stop to wonder where they came from?

We recently paid a visit to the Ironbridge World Heritage Site, up in Shropshire. For a small area, it packs a lot of history. Besides its eponymous iron bridge (the first in the world), the gorge is noted as one of the key fountainheads of the Industrial Revolution. No fewer than 10 museums tell the story of the centre's ironworks, potteries and associated trades. 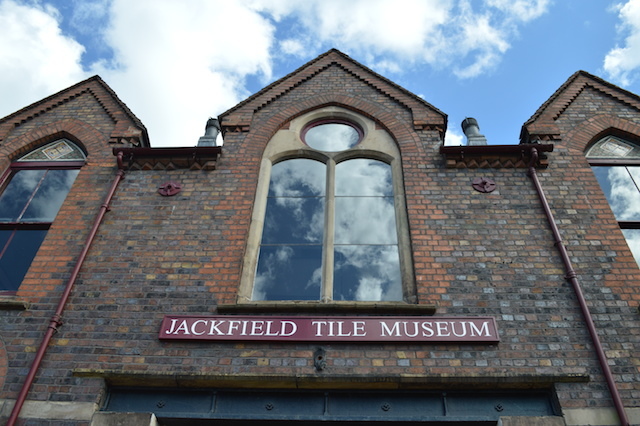 Among their number is the Jackfield Tile Museum. Here you'll find a history of the British tile industry from 1840 to 1960 in the home of one of its key players, Craven Dunnill. Do not yawn. Tiles are interesting. Really. The collection shows just how beautiful and versatile these wall ceramics can be.

Tiles for several London tube stations — Covent Garden among them — were made in these very buildings. A recreation of the tube platform looks convincing, although the panels at the end of the platform are far more attractive than your typical adverts for travel insurance: 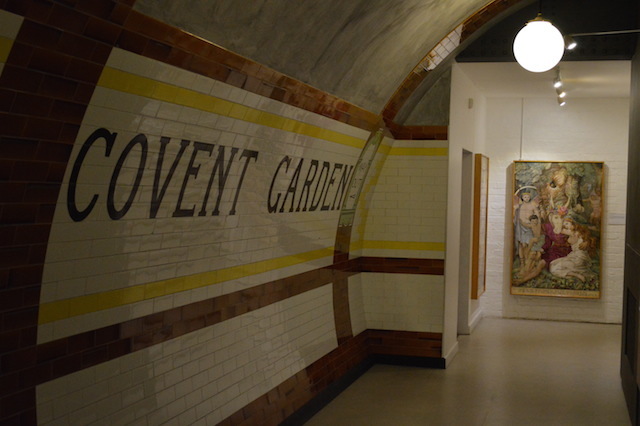 The mock platform is not the only London treasure at Jackfield. The museum has also rescued a dozen or so tiled murals from long-lost children's wards. Here, for example, are a pair of murals salvaged from Middlesex Hospital (which stood for decades in Fitzrovia until its recent demolition): 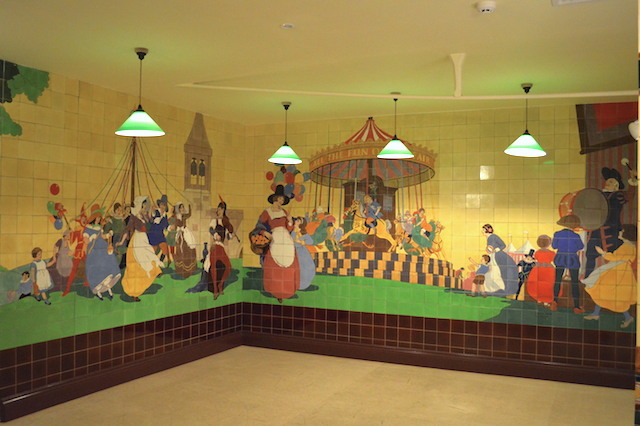 The Maypole (left) and All The Fun Of The Fair (right), were designed by Haydn Jensen in 1929.

This vandalism of children's hospital wards seems to be a sad commonplace. Another room displays several panels rescued from the King Edward VII Memorial Hospital in Ealing:

The travelling creatures are from a wall telling the Noah's Ark story (why not two-by-two?) and were created by Carter & Co. of Dorset in 1935. Perhaps even more charming, and from the same hospital, is this hand-painted depiction of a young Princess Elizabeth — our current Queen — outside the Royal Wendy House (or unachievably grand country house, as current Londoners would view it). 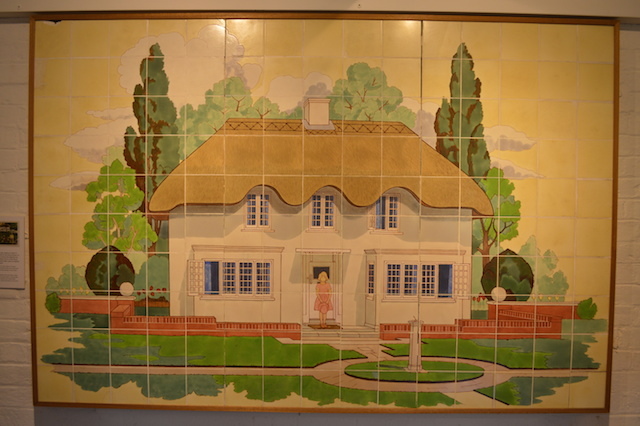 The medieval hunting scene below, meanwhile, was rescued from the skip of Charing Cross Hospital in the 1970s. It was hand-painted in London in the 1890s. 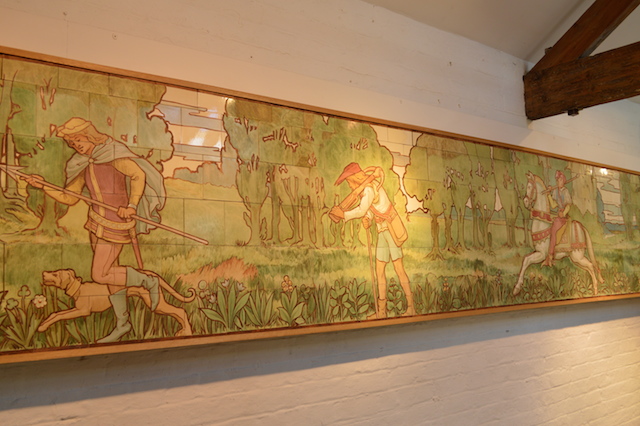 The panels are just a small part of what turns out to be a fascinating museum of the encaustic arts. Set aside a couple of hours to fully appreciate its charms.

Besides the Tile Museum, the Ironbridge area contains many other wonders with London connections. Broseley Pipeworks gives a history of the clay tobacco pipes that still litter the Thames foreshore to this day. Coalbrookdale Museum of Iron, meanwhile, houses several rooms of artefacts from the Great Exhibition of 1851. All the objects in this space were created on site, or at the nearby chinaworks, and were displayed inside the Crystal Palace. 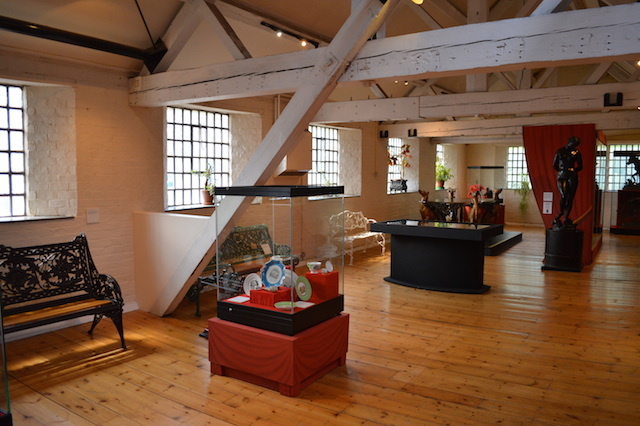 You'll even find a little bit of Kensington Gardens lurking round the corner. The Great Exhibition gates were damaged by a truck in 1986. They were soon restored, but the broken fragments have returned to Coalbrookdale, where they were first cast. 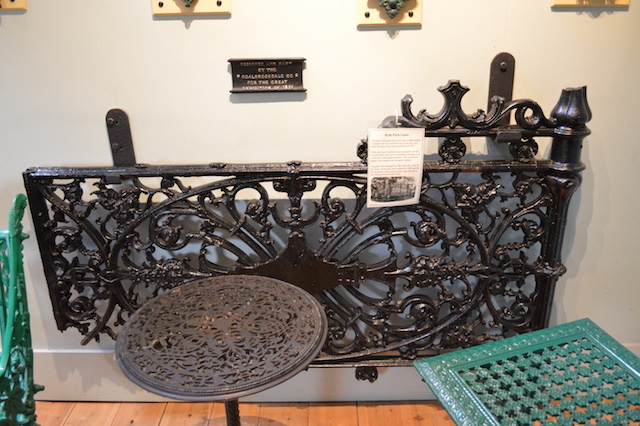 The Ironbridge Gorge Museums and surrounding area are packed with stuff to see, and are just two and a half hours by train from London to Telford.