This weekend's Things To Do In London, sponsored by thinking bob.

CLOCKS GO FORWARD: Don’t forget, the clocks go forward an hour at 1am on Sunday morning.  You’ll lose an hour in bed, but on the plus side, summer must be on the way.


PUB: Just want to kick back and relax with a pint and a packet of pork scratchings? Our pubs guide has information about all the best pubs in London, organised by area for your convenience. Find a boozer nearby, try a new place, or see if your local’s in there.

ALL ABOARD: London Transport Museum in Covent Garden opens its new family play zone on Saturday. Children can climb into the driver’s seat of a real bus, repair a mini tube train and play in the ‘Lost Property’ office. They can also enjoy sailing the Thames Nipper and lots more.

CHOCOLATE FESTIVAL: Head to the Business Design Centre in Islington for the Festival of Chocolate, with exhibitors, workshops and a cocoa spa. £12/£9, prebook, 27-29 March

ART FAIR: It's difficult to find a free-entry art fair these days. If you feel arty this weekend, head to Candid Galleries in Angel where you'll find the New Artist Fair 'Framed Exhibition': browse over 1,000 original prints and get to know the artists. Free entry, until 29 March

EASTER HOLIDAYS: It's the first weekend of the school holidays. Take a look at our suggestions for things to do in London with children and teenagers, from Lego to puppets to Cinderella to lemurs to bubbles. 28 March-12 April


SPRING UP FOR HOMELESSNESS: St John’s church in Hackney Central will play host to a day of street food, craft beer and fun for all the family – including a bouncy castle, face painting and an appearance from Peppa Pig – all in aid of The Big Issue Foundation. At 11am and 2pm there will be performances of children’s theatre Signor Baffo’s Restaurant in the church (£5 entry), and at 4pm Dhaba Lane will host an Indian afternoon tea in the church (£30, prebook). Free entry, just turn up, 10am-6pm

STRATFORD PHOTOGRAPHY: Bleeding London, the project which is trying to photograph every street in London, has a meet-up in Stratford to try to capture all the streets currently missing in the area. Free, prebook, 11am

EAST END WALK: Footprints of London guide Sue Sinton Smith leads a guided walk around East Ham, once part of Essex but now part of London. See a 100-year-old market and learn how the arrival of the railway transformed the area. £10/£7.50, prebook, 11am

SIGNED & NUMBERED: Head to The Peckham Pelican where over 50 Camberwell College of Arts' BA Illustration students present an editions fair of work, all for sale. Expect books, games, t-shirts, limited edition prints, ceramics and one off products. Free entry, 12pm-7pm

FOOTBALL FESTIVAL: Wingate and Finchley Football Club has its annual community day. The 1pm match against Dulwich Hamlet is pay-what-you-want (followed by a supporters' match at 4pm). The club is also raising money via a bucket collection and a raffle for The Noah’s Ark Hospice. Pay what you want, just turn up, from 1pm

RESCUE 4 CHILDREN: This fundraising event is a seminar on the psychological roots of ISIS and the issues facing middle eastern society. Held at Rio Cinema on Kingsland High Street. £10, just turn up, 1pm-5pm

MEXICAN BRUNCH: Casa Negra in Shoreditch hosts a Mexican themed brunch party. Get yourself a Mariachi Brunch, or just take part in the games and live music. From £15, prebook, 1pm-7pm

LOOKING BACK: Artist Jack Strange is in conversation with archaeologist Helen Wickstead at Pump House Gallery in Battersea Park, coinciding with The First Humans exhibition. The topic of the discussion is The Value of Looking Back, and audience members can contribute to the discussion. Free, prebook, 2pm-3pm

POP UP FUCK OFF: Broadway Studios on Tooting Broadway is about to be pulled down and redeveloped into luxury flats, but before that happens, it hosts one last hurrah. Pop Up Fuck Off will have live music, art and performance throughout the afternoon, into the night. 3pm-late

PING PONG: Mencap's annual Ping Pong Championship takes place at The Folly in the City, raising money for the charity. Prizes awarded for the winning team and the best dressed team (dress code is neon). Followed by an after party. £25, prebook, From 6pm (after party from 9pm)

COMEDY: Josie Long was meant to be doing her latest show Cara Josephine at Battersea Arts Centre, but because of the fire it's now at the Four Thieves pub. Different venue, same great show. £15/£12, prebook, 7pm and 9.30pm

SLEEPING WITH SHERLOCK: Enjoy a three-course dinner, talks from detective specialists, comedy performances and improvised story-telling at Museum of London's all night event, tying in with the current Sherlock Holmes exhibition. Learn the secrets of fingerprinting and blood splatter analysis. £175, prebook, 7.30pm

CULTIVATED COCKTAILS: To close their two week pop-up, Bestowed Kitchen will be hosting a special vegetable, fruit and herb inspired cocktail night in Walthamstow to celebrate all things grown and wild. Free entry (drinks from £3.50, food from £3), RSVP, from 7.30pm

CUTTY SARK THEATRE: As part of Cutty Sark's Theatre season, see a performance of The Man Who Left The Titanic, about Bruce Ismay, the managing director who escaped the sinking ship by lifeboat as many passengers died. Was he a coward, or would any of us done the same in that situation? £15, prebook, 7.45pm

SOME LIKE IT HOT: Watch 1959 classic film Some Like It Hot at Feast community market in West Norwood, preceded by live music from Lon­don based Jazz Singer Har­riet Eaves. Bar and snacks available. £4, just turn up, 8pm

DEATH LINE: The Brunel Museum in Rotherhithe hosts a screening of Death Line, a classic British horror film starring Donald Pleasence as a detective investigating an unusual disappearance on the London Underground. £18 (including cocktail), prebook, bar open from 6pm, film starts at 8pm

WWF EARTH HOUR: Everyone across the globe is encouraged to switch off their lights for one hour as part of WWF's Earth Hour, show their dedication to caring for the planet. Free, 8.30pm-9.30pm


SUNDAY ROAST: We’ve updated our list of the best Sunday roasts in London, now with ratings and a map. Take your pick, or check out your other food options.

CHARITY HAIRCUT: Over 20 professional hairdressers have volunteered to offer free haircuts at The Goldwell Academy, Shaftsbury Avenue in return for a charitable donation towards HIV charity the Terrence Higgins Trust. Donation required, just turn up, 10am-6pm

RIVER FLEET: Footprints of London guides Rob Smith, Debbie Pakulski and Jenni Bowley follow the course of the hidden River Fleet from the springs of Hampstead to the Thames at Blackfriars. Walk the whole ten miles, or just part of it. £10-£18, prebook, 10.30am-6.30pm

MUSICAL DISCOVERY: Families, head to Royal Academy of Music for the String Quartet Discovery Day. Listen to a concert, perform together, write your own music, try out a violin or even build your own paper cello. Age 5+. Free, just turn up, 11am-4.30pm

FROCK ME: The Vintage Fashion Fair is back at Chelsea Old Town Hall with over 50 stalls of vintage fashion and accessories and a pop-up tea room selling vintage-style afternoon tea. £4, 11am-5.30pm

ART MARKET: The DIY Art Market at Epic Dalston is a platform for London’s emerging and established independent artists/makers to sell directly to the public. Free, just turn up, 11am-6pm

BERLIN BRUNCH: brünch hosts a Berlin-style Sunday brunch pop up at Doodle Bar in Battersea, with a live DJ throughout. £22, prebook, 11.30am/2.30pm

RIVER RACE: Watch out for the Head of the River Race on the Thames between Mortlake and Putney. Over 400 crews of eight rowers take part in this processional race, starting from 12noon

BEACH CLEAN-UP: Surfers Against Sewage is looking for volunteers to take part in the Big Spring Beach Clean-Up at Gabriel's Wharf (by OXO Tower). Bring your wellies! Free, just turn up, 1pm-3pm (see our recent attempt at cleaning up the river)

FAMILY WORKSHOP: The Design Museum hosts a family workshop, inspired by the current Women Fashion Power exhibition. Have a go at creating your own '80s themed accessories. Free with museum entry, just turn up, 1pm-4pm

LITTLE BLACK BOOKS: Book publisher Penguin celebrates its birthday at The Book Club in Shoreditch. For the whole of March, the venue is selling Penguin's Little Black Classics, and tonight there's an evening of performance, games and quizzes — you don't have to have read the books to take part. £5, prebook, 6.30pm

COMEDY: Join Gein's Family Giftshop at the Backyard Comedy Club in Bethnal Green with guests The Boy With Tape on His Face, Tim Key, Goose and sketches from Beard. £5/£3, prebook, 6.30pm

PASSION PLAYS: The Isango Ensemble performs its own version of Mysteries, a re-working of the 14th century Chester Passion Plays encompassing the whole of the Bible. Isango’s unique version of these plays is performed by a small group of choral singers in Xhosa, Zulu, English, Latin and Afrikaans. At Sam Wanamaker Playhouse. Various prices, prebook, 7.3opm

With more than 35 social events a month, thinking bob makes London a less lonely place for newbies. This ready-made social club is aimed at curious people who want to meet like-minded Londoners and discover the capital through alternative and interactive events. The first month of membership is free so sign up today and give it a try! 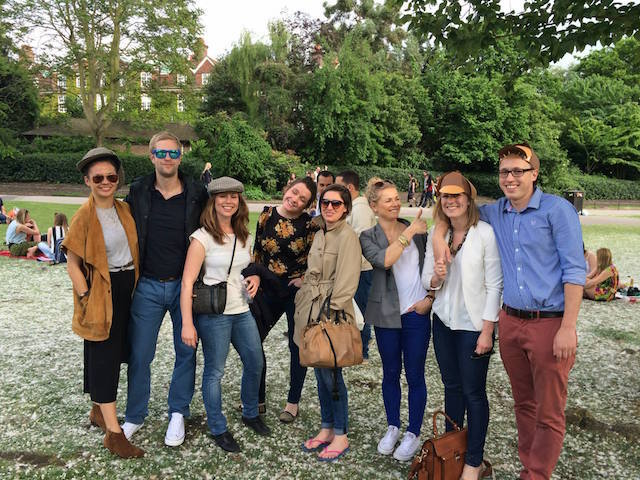 This weekend’s Things To Do In London This Weekend is sponsored by thinking bob.