Sherlock Holmes At The Museum Of London 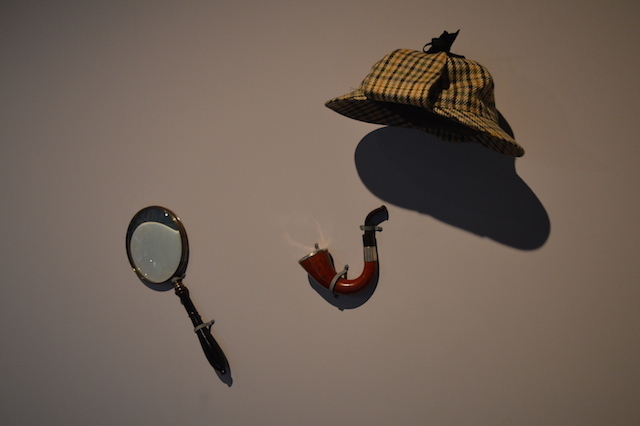 In which we hail a hansom, make all speed to London Wall and consult a detective of singular fame.

There's no doubt about it, the Museum of London is really chasing the blockbuster on this one. Who can blame them? Sherlock Holmes's gaslight has rarely burned so bright, and public appetite for the sleuth is insatiable. The museum could have mounted an exhibition of Benedict Cumberbatch's toenail clippings, and still they would come.

What they have mounted is a thoughtful and detailed exhibition, whose highlights are subtle. Yes, there's the Cumberbatch coat and a massive canvas of the Houses of Parliament, but the value here is in the detail. Like the great detective, you need to examine everything closely, take your time, read every label. 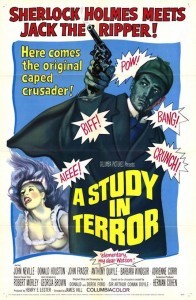 Neat flourishes are present right from the start. We make our way in through a hinged bookcase that puts the ‘entry’ back into ‘elementary’. Inside, sections are thematic rather than chronological. It’s somewhat surprising to begin with a history of the detective on screen, but then we suspect that more people will be familiar with their Rathbones, Bretts, Downey Jrs and Cumberbatches than the original written-word stories. This display also offers a punchy, visual start to an exhibition that is thereafter composed mostly of books, paintings and objects in glass cases.

Further sections offer up nuggets on the genesis of Sherlock Holmes, the London he knew so well, and a final room examining his habits, talents and peculiarities through objects of the time. There is a strong emphasis on art, as has become common practice at this museum in recent years. The streets of the Holmesian city are revealed through the sketches of Whistler, the impressionism of Monet and annotated maps of the detective's peregrinations. Trumping them all, though, is the work of Sidney Paget, who sketched key Sherlockian scenes for Strand magazine. Paget was not the first to illustrate the Holmes stories (an honour that, surprisingly, went to Conan Doyle’s father), but it was he who first crystallised the time-honoured look of the characters, deerstalker hat and all. His original illustrations are not only of immense historical importance to the literary world, they are mesmeric works of art in their own right.


Holmes is timeless, talismanic, protean — reimagined for every generation. He's tackled Jack the Ripper, sentient holograms and murderous 22nd century robots. As the full title of this exhibition notes, he will never die because he never lived.

Sherlock Holmes, The Man Who Never Lived And Will Never Die is on at Museum of London until 12 April 2015. Tickets £12 (adult). See also the museum's series of Sherlock events.