Even More Tall Buildings For London

263 new towers of at least 20 storeys are on the cards for London, an updated study has revealed. The figure includes proposals awaiting review, buildings that have been approved, and towers already under construction. The number has grown from the 236 buildings cited this time last year. Both studies come from New London Architecture and GL Hearn.

How tall is 20 storeys? It varies greatly, depending on the floor-to-ceiling distance for any particular building. Roughly speaking, we're talking 263 new buildings at least as tall as the OXO Tower. That might not seem particularly lofty, but remember that this is the lower limit of the study. Most of the towers will be much taller. The mean of those under construction is somewhere around 30 storeys — more than the South Bank's Shell Centre.

The increase shows a marked uptick in buildings under construction, from 45 last year to 70 this year. The report doesn't list individual projects, but the rise probably includes such high-profile towers as the 163-metre 1 Blackfriars (the Boomerang), 52-54 Lime Street (the Scalpel) and Principal Place in Shoreditch. 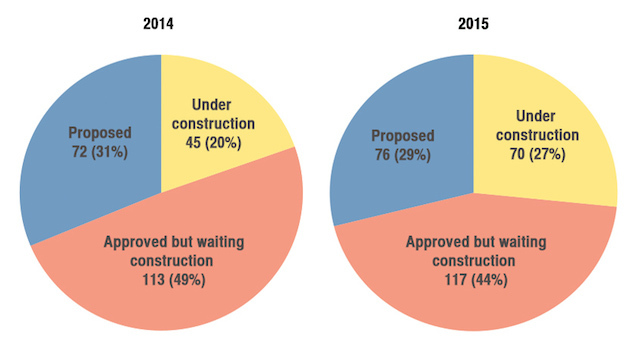 Of buildings approved but waiting construction, we await further news on the redesigned (and renamed) Pinnacle, which would have been 288 metres, and the equally long-stalled Riverside South near Canary Wharf, which would be 237 metres tall. A newly proposed project for Greenwich, possibly not picked up by the study, involves a cunning arrangement of reflective surfaces to chase away shadows (see image below).


Of the 70 towers currently under construction, 64 are residential — and largely unaffordable residential. A humming hive of such activity is at Nine Elms, where 18,000 homes are planned or under construction. Come 2020, the riverside quarter will have a skyline to rival the Docklands, and Nine Elms will become Nine Towers. Not to be outdone, Canary Wharf itself is embarking on a major expansion, as the Wood Wharf development begins construction. Croydon and Stratford, too, are hotspots for development.
The full report, including breakdowns per borough and tower height, can be viewed here (PDF).

The increase in tower proposals will reignite debate (not that it ever went away) on the capital's growing skyline. London's population is now higher than at any point in its 2,000 year history. By all estimates, it will continue to rise. Either we grow upwards or we grow outwards, or we do both*. Arguments about the pros and cons of bulking up the skyline with high-end residential blocks are somewhat trivial in the face of that more pressing concern of Londoners: "I don't want a luxury apartment, I just want somewhere affordable to live".

*Or we make like Egypt and plan a whole new capital elsewhere.