Who Were The Seven Sisters?

By M@ Last edited 74 months ago
M@ Who Were The Seven Sisters?

Seven Sisters is a bustling neighbourhood to the south of Tottenham, easily reached by the Victoria Line. But where does the enigmatic name come from? This is a tale of ancient shrines, fecund families and — most of all — trees.

If you head a few paces north-east of the tube station today, you'll find an unremarkable strip of park known as Page Green. This narrowest of open spaces is enjoyed more as a verdant cut-through than a place to linger. Keep your eyes open though and you'll spot this circle of hornbeams towards the centre: 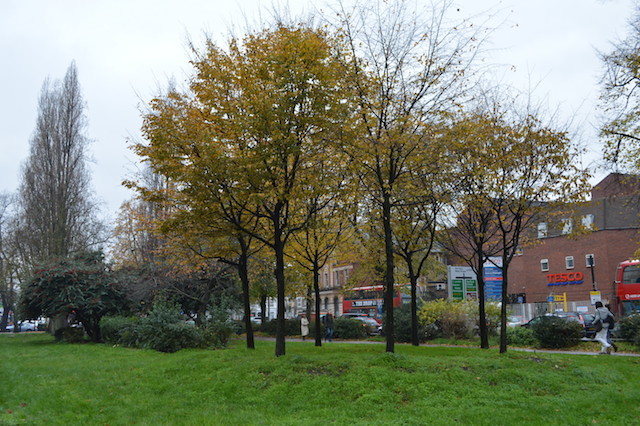 The ring of trees was planted in 1996 by a remarkable delegation: five families, each containing seven sisters. It's a tradition that may go back hundreds of years.

The first evidence for a circle of trees comes from 1619 when an unnamed arboreal ring can be seen on a land map to the western end of Page Green. About a decade later, local vicar and historian William Bedwell mentions an ancient walnut tree surrounded by a tuft of elms. These uncertain origins have led to any number of myths about the leafy landmark. One story posits a pre-Roman druidic connection — the Celts often held groves as sacred sites, and this one's right next to the ancient Ermine Street. In his indispensable book London Lore, folklorist Steve Roud points out the flaw in this tale: walnut trees were introduced by the Romans after the Celtic period. Page Green sounds a bit like Pagan Green, which may have helped the myth along. Other legends connect the seven elms with seven sisters (or sometimes daughters) of Robert the Bruce, who owned land in the area in the early 14th century. Again, evidence is lacking. Others think the trees are an arboreal memorial to a protestant martyr, or a farewell planting by seven sisters about to scatter to the four winds.

Myth becomes documented history from the 18th century. The walnut vanished at some point, leaving the circle of elms. These were first recorded as the Seven Sisters in 1732. Here they are in 1830 when they're described as standing against the five-mile stone from Shoreditch Church: 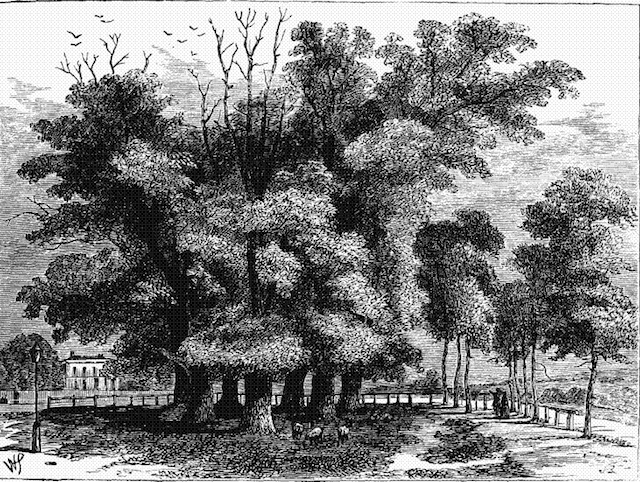 They must have formed a well-known landmark at the time for the new thoroughfare connecting Tottenham to Camden Town in 1840 was named Seven Sisters Road. Their fame was cemented in 1872 when Seven Sisters train station opened nearby, followed by the tube stop in 1968.

The mighty plants have changed several times over the centuries. In 1852, the originals were in a sorry state and new trees were planted by the seven daughters of a Mr J McRae. These elms lasted just 20 years, when a newspaper described "six venerable and withered trunks" (perhaps the stumps of the originals were still hanging around). A new circle was planted on 2 March 1886 when local siblings called Rosa, Alice, Amy, Edith, Julia, Georgina and Matilda Hibbert — the only family in Tottenham to contain seven sisters and no brothers — did the honours. Over the years, the sisters returned to view their handiwork. Matilda's was the only one that wouldn't take. According to a later interview, the sister "pointed to her withered tree and said, 'I'm the doomed one'". Alas, her premonition came true. Mathilda passed away in 1900. Her six siblings lived on, regrouping at the elms each year. Five trees had died by 1928 when three of the surviving Hibberts were recommissioned to "make good the deficiency". The six sisters continued their reunion until at least 1937, bringing the original commemorative brooches and spades used in 1886. One of these spades can still be seen at the Bruce Castle Museum in Tottenham.

Where to see the Seven Sisters

Further plantings took place in 1955, courtesy of sisters named Basten. Perhaps because elms had proven too fragile for the ground, this iteration opted for Italian polar, and the trees were planted in two clumps rather than a ring. The most recent ceremony drew on the digging skills of five local families, all blessed with seven sisters. This time hornbeams were chosen. The still-standing ring was installed at the centre of Page Green in 1996. You can view it today, although there's no obvious plaque or information board recalling the centuries-old tradition. The only acknowledgment can be found on the nearby tube platforms, where the trees are commemorated in the tiling pattern, a design by Hans Unger installed when the tube was built in 1969.

Incidentally, these trees aren't the only Seven Sisters to grace the town. From the 18th century, another famous circle could be found in Kew Gardens. The trees began to die from fungal infection in the late 19th century, and the final member was lopped away in 1916.