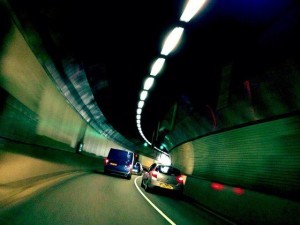 Transport for London (TfL) will release a consultation this week on plans to introduce tolls on the Blackwall Tunnel and its potential future neighbour, the Silvertown Tunnel.

It's been pretty clear for a long time that for any future river crossings in east London to be viable, they would end up being tolled (including the existing Blackwall Tunnel but not the Rotherhithe Tunnel). Needless to say, motorists are opposed, but TfL says it's necessary to manage congestion and provide funding.

Motorists' biggest gripe about tolls is lack of transparency about how the money is spent, not to mention it's an unwelcome addition to the already steep cost of motoring, especially for those on low incomes. The London Chamber of Commerce and Industry (LCCI) threw its support behind the scheme, but a spokesperson says:

"Any toll would need to have a special tag system and also a discount for businesses and residents similar to the congestion charge.

"But the key issue is where does the money go? If it goes on future river crossings then it will get support but if it goes on making City Hall fatter then that won't do. TfL needs to say."

Anyone who's been stuck in a tailback approaching the QE2 bridge at Dartford is also likely to be concerned about traffic jams. The tollbooths at Dartford are to be removed in November 2014, which means motorists will no longer pay at the bar­ri­ers, but instead pay in advance or up to mid­night the day after crossing. The proposed tolls at Silvertown and Blackwall will use the same system which could mean motorists won't see the kind of queues regularly encountered on the M25.

It does also raise the question of whether tolls could in future be imposed on further river crossings within London. As far as we can see, there's nothing to stop TfL or the Department for Transport (DfT) restricting crossing tolls to east London.Although the congestion charge covers the City and a large chunk of central and west London, drivers of diesel cars face an extra charge under the new Ultra Low Emissions Zone (ULEZ). If demand for road space increases, the cost to use it is likely to grow too. Even if tolls were introduced for Blackwall and/or Silvertown, it doesn't mean they couldn't be rescinded at a later date. The London Assembly Green Party believes not having tolls will make things a lot worse. Figures supplied by TfL to Green Party AM Darren Johnson (published in The Wharf) suggest traffic crossing the river could increase by 13,000 journeys each day if there were no tolls.

Despite a general groundwell of support for the Silvertown Tunnel, it has also been met with fierce opposition. Campaigners say it will increase congestion in areas either side of the tunnel which are ill-equipped to handle the additional flow. Johnson said:

“Areas of Greenwich, Newham and Tower Hamlets could end up with a lot more congestion and pollution than the Mayor of London suggested in the public consultation leaflets and displays. Boris Johnson wants to build a four-lane tunnel at Silvertown, but is telling everyone that it will function as a two lane tunnel for those drivers who are prepared to pay the tolls. The reality is that any decisions about tolls is subject to a public consultation and whatever is decided by this Mayor could always be changed by a future Mayor.”

Campaign group No to Silvertown Tunnel has published some images released by TfL on what the proposed road structure could look like. Air quality is the one of the other big concerns — in May, 853blog examined pollution study results across south-east and east London with some worrying results. The apparent inevitability of the closure of the Woolwich Ferry in favour of 'a package of river crossings' is also scrutinised.

Photo by Rob Emes in the Londonist Flickr pool.