Police Get Go Ahead On Water Cannon 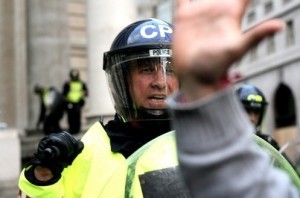 The Metropolitan police have been given the go ahead to buy three water cannon at a cost of £218,000 — before their use has been approved by Home Secretary Theresa May.

In a curious bit of reasoning, a statement from City Hall has claimed that buying the water cannon prior to approval means it's saved us £840,000 per cannon. Which is a bit like buying a Ferrari in the January sales on the basis that it's a cost saving, especially as the second-hand water cannon may have to be replaced at full cost within a couple of years anyway. London Assembly Labour Police and Crime spokesperson Joanne McCartney said:

The Met has identified three instances in the last 10 years when it may have used water cannon. Boris says he would have not wanted to see them used in at least one of those situations, the 2010 student protests."

Despite the Met saying back in 2011 that water cannon were 'not the answer to combat future rioting' and facing some of the worst cuts in police history, they have pushed ahead with the plan to buy water cannon by this summer. There's also the concern that water cannon could be used to disperse a peaceful protest. Let's just remind ourselves what Boris Johnson told the London Assembly in a 2010 Mayor's Question Time (MQT):

“It is certainly my view that we are not instinctively in favour of ratcheting up the panoply of implements of crowd control in this city. This is a free city which has a great tradition of free speech. We do not want to see any kind of arms race with protestors. At the moment there are no plans to go, for instance, for water cannon.”

The purchase also goes directly against a vote of 20 to 5 by the London Assembly. The Met has repeatedly claimed that while there is no indication that large-scale civil unrest is anticipated in the capital, the water cannon vehicles would be available, but 'rarely used and rarely seen'. Given the swingeing cuts in nearly every area of public spending in London, buying three vehicles for £218,000 just on the off-chance seems like one hell of a risk, even if they can (as the Met says) be sold on. Green party AM Jenny Jones said:

“Pre-empting the Home Secretary’s decision is rash and smacks of arrogance on the Mayor’s part, not to mention a possible waste of taxpayers’ money at a time when the Met is making huge cuts.

“It’s also ignoring the views of the vast majority of Londoners who don’t want water cannon. If the Mayor had actually taken the time to look his own consultation he would have seen 98% of people opposed the plans for water cannon.”

An article from MayorWatch back in March said the mayor's decision to allow the purchase was based on 'public ignorance and contradictory evidence'. Not least the fact the Mayor's Office for Policing and Crime (MOPAC) are basing claims of public support on a public poll 'in which 52% of respondents think they know, at best, “a little” about water cannon and just 41% of those asked correctly answered that the Met doesn’t already have them.'

Earlier this year, Dietrich Wagner, the German protester who was blinded by water cannon at a demonstration in Stuttgart, visited London to lobby the mayor over the use of water cannon.

"Water cannon are not something I want to see on the streets of London. In an ideal world they would never be used. But I have to think about the needs of the police and their requests to me."

Jenny Jones asked what the outcome would be if Home Secretary refused authorisation, to which the mayor replied he believed that to be unlikely. He's also volunteered to experience what it's like to be soaked by water cannon.