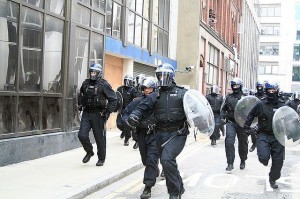 The debate over whether London's police should get water cannon is stepping up.

The Metropolitan police has requested permission from the Home Secretary for three water cannon, to be in place by this summer. They've identified three second hand machines that would cost £200,000 to buy and transport – but the cannon are 23 years old and expected to have a lifespan of just two or three years. At that point they'd need to be replaced with new machines, costing anywhere between £600,000 to £1m each. The initial £200k expenditure would come from the Met's budget, with the hope that forces around the country or the Home Office would chip in to buy the new ones.

This 'buy cheap, buy twice' approach has added to the scepticism of London Assembly members, who are also concerned that the police haven't properly made their case. In the budget debate last Friday four Conservative AMs backed a Lib Dem / Labour motion (PDF) calling on Boris Johnson not to authorise any spending on water cannon this year. The motion carried 20 to five; it has no official impact on the Mayor but with serious concern shown by members of his own party he may well have second thoughts.

There's a public meeting on Monday 17 February at City Hall, which will be attended by Deputy Mayor Stephen Greenhalgh and police representatives. If you want to attend, email watercannonengagement@mopac.london.gov.uk. This meeting is part of the public engagement around water cannon which ends on 28 February.

Before that meeting there will be a rally against water cannon outside City Hall, from 5.45pm. One of the speakers will be Dietrich Wagner, who lost his eyesight when German police used water cannon on people protesting against a railway development in Stuttgart.

Photo by Tanya Nagar from the Londonist Flickr pool