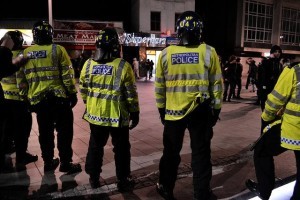 The Metropolitan Police wants to have water cannon available to use by this summer, it's emerged.

According to London Assembly Member Jenny Jones there will be a consultation from the Mayor ending in February, as it's City Hall who would have to provide funds to buy equipment and train officers. The Home Secretary would have to licence water cannon, which are currently not permitted for use anywhere on the UK mainland (very different story in Northern Ireland), but Theresa May has said she won't buy them.

We were watching Dara O'Briain's show Craic Dealer the other day, in which he talks about water cannon. Do people think, he asks, that they work by distracting crowds with rainbows, or soaking them and suddenly everyone's up for 'sexy time'? No; they can rip your eyes out of your head (warning: there are some very disturbing photos in that link).

The idea of water cannon was raised last May, when we noted that the Met itself said back in 2011 that water cannon were ‘not the answer to combat future rioting’ and Boris Johnson has previously opposed their use. However, being questioned during Mayor's Question Time in May 2013, Boris Johnson said he would support the police having them as a last resort, even if the prospect of them being used was "vanishingly unlikely". In a letter to the Home Secretary, Johnson says the Met Commissioner has promised water cannon would be "rarely used and rarely seen".

Jenny Jones says each water cannon costs £1.3 million, and the Met plans to train 20 officers in their use and 200 Territorial Support Group (TSG) members in when to deploy them. (If the TSG sounds familiar, they're the ones implementing kettles during protests and generally being criticised for heavy-handed tactics.) That's a lot of money for something that's vanishingly unlikely to be used, particularly in light of cuts to the police budget.

Photo by James Lemons from the Londonist Flickr pool