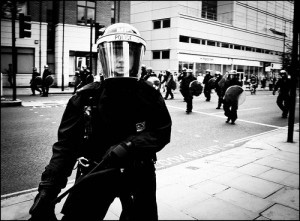 Figures from the Metropolitan Police have revealed that nearly 3000 officers have been cut, mainly from borough teams, since 2010.

The cuts range from 3% in Barking & Dagenham to 22% in Lambeth, or 13% across all boroughs. Followers of Boris Johnson's electoral campaign may remember point four of his nine-point plan — 'Making our streets and homes safer with 1,000 more police on the beat'. But with a failure to keep police numbers at around 32,000 and recent cuts, it's been pointed out that there are actually 1500 fewer officers since his election last year while crime in some boroughs remains high.

The mayor's office was also asked by the UK Statistics Authority (UKSA) to clarify the figures they were using during the police consultations after confusion over their interpretation of data.

All of which makes the Met's recent announcement that they're considering splashing out on two water cannon at a cost of £1.3m each even more baffling. London Assembly Labour Police and Crime spokesperson, Joanne McCartney said:

"Instead of cutting the police budget by 20% and buying water cannons the government and Mayor should be properly resourcing the police. Some boroughs have lost significant numbers of officers, in Camden 160 police officers have been lost, in Southwark it’s 159, Lambeth 230 and Westminster have lost 259 officers.

The use of water cannons is extremely controversial and the evidence for their effectiveness is very unclear. We clearly need more police officers, and we need them to be riot trained. Water cannons are no replacement for a properly resourced and functioning police service."

We are also frankly mystified as to why the Met would use funds much needed elsewhere for such a controversial and dubiously-effective purchase. The Met itself said back in 2011 that water cannon were 'not the answer to combat future rioting' and Boris Johnson has previously opposed the use of water cannon. It appears to be just the latest in the Met's inexorable push to increase their powers without public consultation.

Home secretary Theresa May (who appears to be on a mission to woo the police this week) has said that she is considering the case for water cannon on the basis that she wanted officers to have "the tools they need" to do their job. Which is all very well but cutting the officers using the tools doesn't appear to be a particularly useful strategy unless the long-term plan is to replace them with robocops.

Photo by Sven Loach in the Londonist Flickr pool.