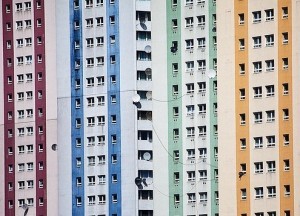 The scheme was actually launched last year, and aims to provide voluntary accreditation to private landlords and letting agents based on minimum levels of service for tenants. All the things which tenants generally have a problem with are covered — transparent fees, better living conditions, better communication between landlords and tenants, quicker repairs and maintenance, and protected deposits (the latter which already exists in the form of the Tenancy Deposit Scheme).

The very obvious shortcoming of the LRS is that it's voluntary. The good landlords (and trust us, there are some out there) who don't need a certificate are the ones who will be applying for their LRS. The landlord who received his certificate yesterday is a perfect example — already registered with the London Landlord Accreditation Scheme and the National Landlords Association. It kind of goes without saying that rogue landlords won't touch the LRS with a bargepole.

To get an LRS certificate, landlords will need to go on a one-day course to learn about renting property, sign a code of practice, and declare that they are a fit and proper person as well as meeting the standards outlined above.

We recently asked Londonist readers to tell us their tenancy woes and there were certainly some shockers out there. But it's pretty obvious that the LRS won't help them. It's a step in the right direction but it's not a magic bullet for fixing London's rental problems. Green Party London Assembly member Darren Johnson said:

“The Mayor of London’s standardgives tenants no real protections against landlords evicting in retaliation for complaints, or against big rent hikes, and fails to ban outrageous letting agent fees. He is effectively endorsing six landlord registers that will only cover good landlords. We need regulations to protect tenants from all the rest."

“The Mayor must support real reform of this sector. He should have been lobbying for government legislation to create longer tenancies as standard, caps on annual rent rises and a ban on lettings agents’ fees for tenants. Instead, he has wasted two years consulting on a voluntary standard that is not worth the papers it's written on. Private rented housing and lettings agents have minimal regulation. This must change otherwise people will continue to be ripped off and taken advantage of by unscrupulous landlords and lettings agents."

London's tenants could finally start to see some changes. We investigated Build to Rent recently and found it offers precisely what people have been asking for — longer and more secure tenancies, no agency fees, no extra service charges and no spurious rent rises.

As is usual with these things, there's no one solution for the crazy state of the capital's rental market and beleaguered tenants. The LRS is not that one solution and it just seems like a big fat waste of everyone's time and taxpayers' money to spend two years developing a scheme which no-one actually has to join.

You can see the London Rental Standard here.

Photo by Gary Donnison Photography in the Londonist Flickr pool.