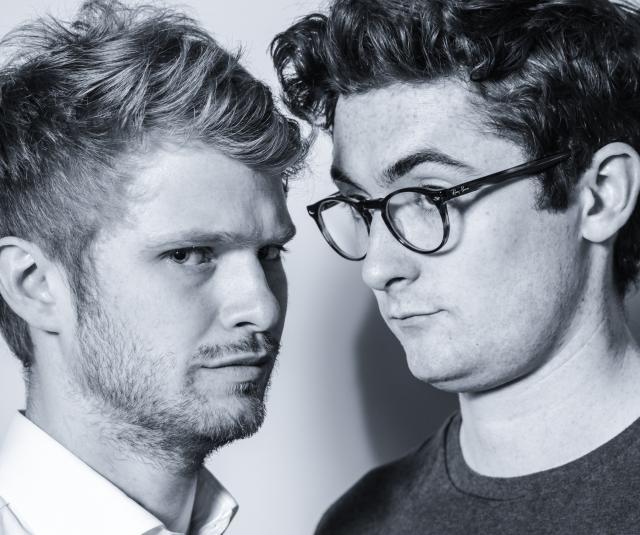 Much of what you need to know about The Pin can be summed up thusly: they are ex-Cambridge Footlights. We only just found that out during a quick Google, but during their current Soho Theatre show we couldn't help a thought that constantly ran through our brains: is this what early Fry and Laurie would have been like?

Other things you need to know about The Pin: they are a sketch duo, down from originally being a sketch trio. They are Ben Ashenden, who looks like Jarvis Cocker wearing Harry Potter specs, and Alex Owen, who looks like a 12-year-old Neil Patrick Harris. Their sketches, a mix of old favourites and newer stuff in this show, are clever constructs and, sometimes, completely deconstructed. One 30 second sketch based on a mishearing of the word 'Speedos' is broken down and extended to run for several minutes, bringing in audience members as foils and stooges.

What's lacking is energy. There are great ideas and excellent one-liners, and the duo do their fair share of running around, but sketches are never allowed to gather speed. Punchy skits are separated with chats to audience instead of piling up against each other, setting up gag after gag which would have killed. It's a bit too laid-back, a bit too inside their heads, a bit too Footlights.

The audience participation, while well placed, also needs to be more tightly controlled. At the moment the general public are free to do their own thing, which has the potential for disaster. The Pin could take lessons from Adam Riches on how to make audience members their willing meat puppets.

In short: in a couple of years these guys are going to be up there with Idiots of Ants and Pappy's. Right now, there's a fascinating chance to catch a talent on the point of truly blossoming out.

The Pin are on at Soho Theatre, Dean Street, W1 until 22 March and 28 March. Tickets £12.50 / £10. For more information and to book see the Soho Theatre website. We saw this performance on a complimentary press ticket.