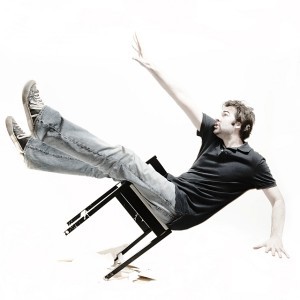 Here are some things that we know, from experience, will make you turn red in the face, in order of redness: doing the splits in a moment of indecision while on a zebra crossing, so that one leg marches relentlessly onwards and the other decides to turn back, so hard that the lorry driver who stopped to let you cross has to compose himself before he starts driving again and watched in full by almost 200 members of your school; and getting up on stage at a comedy show. To reiterate: from experience.

Now and because of this, getting up on stage at a comedy show has always been done falteringly, with hesitancy. Turning beetroot aside, when an act calls an audience member up onto the stage with one pleading, open hand, what they are really saying is "come on here, hold this prop". Their eyes brim with tears and sing: "please, tell this joke for me".

Adam Riches does not beg, nor plead, but he has discovered a new way to turn the audience pink in the face, and that is with gales and gales – and we are talking peals, like a church bell, for a full sixty minutes – of laughter. There is audience participation, quite an amount of it. Normally this would be a warning, but not with Riches. Whether he hands you a swingball bat or a skateboard or a business card, it is done to make the audience laugh; to make you part of the joke, not the butt of it.

For a character performer – Riches takes to the stage in five guises, each wearing the same increasingly stained polo shirt, the shop floor medium tag still in pride of place – he is remarkably deft, rolling with the punches that come with audience members throwing googlies at him by being Greek or cheating at a game. The self-referential asides, the off-the-cuff but on-the-money jokes, all combine to get the audience in Riches' thrall – completely immersed in an hour of solid laughs, nervously hoping they don't get picked.

It is not often we kiss-ass like this, but there's a reason Riches won the plaudits – and the Best in Show award – at August's Edinburgh Festival. His Soho Theatre run has sold out the first two nights and lasts, incredibly, for a month. It is very important that you see this show.