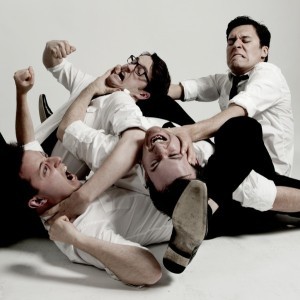 OH GOD. The unbearable agony of loving a show so much that you want to run out and tell everyone how great it is and they must go now NOW, and not wanting to say anything for fear of spoiling it. This is going to be a difficult review.

Idiots of Ants are a sketch quartet made up of Ben (the one that looks a bit like John Hodgman), Jimmy (the one who has recently developed very posh-looking hair), Andy (the one who, for comedy reasons, is dubbed 'the fat one' but really isn't) and Elliot (the one who looks a bit like an ex-boyfriend. Not just personally; we reckon everyone will have an ex strangely called to mind when gazing at Elliot. This is extra disturbing when he's trying to score with the whole audience – DAMN, spoilers).

Sketch comedy is usually quite small in scope; there just isn't the space to develop an overarching theme or message as there is with an hour of stand up. However, the Ants have discovered that a flashing backdrop, excellent sound system and fuck-off tunes go a long way to making everything epic and conducive to having a bloody excellent time. Because as well as being funny, this – the Ants' 2011 Edinburgh show – is good fun. Inventive use of props and two near-silent sketches go beyond what many other sketch troupes are doing, plus there's water throwing. And baby juggling. And penis damage. NO, we can say no more.

There's some gentle audience participation and the show ends with a very clever way of ensuring a standing ovation. (Or, rather, that's the scheduled end to the show; on Saturday night the audience chanted "one more sketch" and got an encore.) We came out full of childlike glee, glowing like the Olympics and then we played air steel drums all the way home. Fantastic.

Idiots of Ants: Model Citizens is on at Soho Theatre, Dean Street, until 29 September. Tickets £10-£20. For more information see the Soho Theatre website. We saw this show free on a press ticket.