One Roundel To Rule Them All 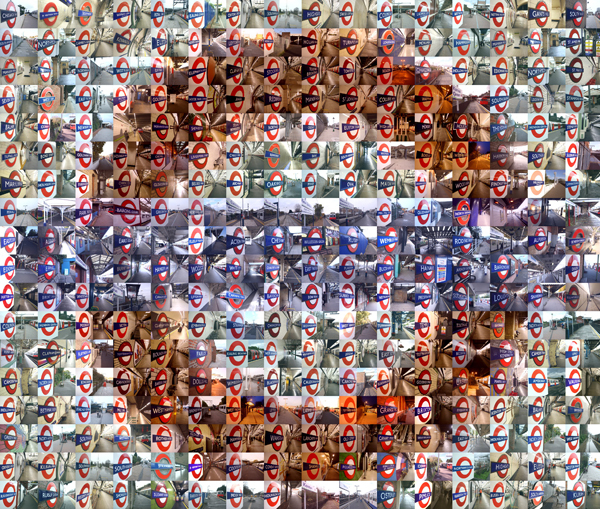 Yesterday, we highlighted the story of Mike Turnbull, who's visited every tube station to take a picture of its roundels. He's not alone. In response we heard from several people who have undertaken similar projects.

The dazzling image above is by Steve Cotton, who runs the long-lived and excellent Art of the State website (@artofthestateuk). He, too, travelled to every station to snap a roundel, then collated them together into something rather special.

"It started after 7/7. After going to the tube stations affected by the bombings and for a while every time I got off at a tube station I took the same picture of a roundel at pretty much the same angle. After a while I'd collected enough that I thought I might as well go for it and visit every remaining station. I then turned the resultant pictures into a super roundel."

Our own tube geek Geoff Marshall (who's also been to every station, several times) then pointed us in the direction of Tim McCready, who not only photographed every roundel, but also put them to song and film.

Finally, we heard from 'Dan', who's cycling the length of every tube, Overground and DLR line. He'll then plot all the GPS trails on a single map and turn it into a poster. You can read more about his mission here.

Dan's project recalls Walk The Lines, in which author Mark Mason trekked the length of every tube line (above ground) in order to better understand the city. We've also been following the pun-tastic endeavour that is INNside Track — a mission to visit the nearest good pub to every tube station. And then, of course, there are those who attempt to pass through every tube station in a single day. The record is currently held by the self-same Geoff Marshall, whom we name-checked above.