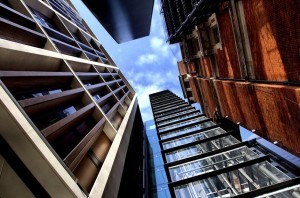 Another week, another round of articles about London's housing crisis. This time, it's a report published by thinktank Civitas which proposes a ban on overseas investors buying property in London.

What are 'overseas investors'? It's become a bit of an umbrella term for anyone rich and vaguely foreign who owns property in London. As far as we can make out, there are two types of buyer people have a problem with — those who buy a property and leave it empty, and the ones who buy property to let. The report says:

"When it comes to prime central London property, Savills says £7 billion of international money was spent on high-end London homes last year, with only 20% of prime property purchases being from the UK. Most importantly, two-thirds were investors rather than owner-occupiers. London Property Partners found up to 85% of prime London property purchases in 2012 were made with overseas money. Just 15% were by UK buyers."

The question we'd ask ourselves first off is why anyone would buy a property in a city as awesome as London and leave it sitting empty. The answer to this is that London is considered a 'safe haven' for investment which means it's less turbulent than other countries so the risk of losing money is lower. London is also a very desirable place to live — it's one of the banking capitals of the world and has a very diverse social culture. So, for investors in, say, Singapore, dropping a couple of mill on a luxury flat in central London is pretty much guaranteed a winner. They don't need to rent it out to provide income and they have a crash pad for when they decide to visit.

The obvious drawback to this is that we then have properties sitting vacant at a time when the housing market is in short supply. Labour proposes doubling council tax for empty homes, though we're not convinced the owners of these houses will be much concerned by that. While it's more common at the higher value end of the market, new builds generally are being targeted:

"Estate agency Knight Frank says foreign buyers spent £2.2 billion on all new-build central London property in 2012, up from £1.8 billion in 2011. It estimates that 85% to 90% of new-build purchases in Greater London have been to UK residents in the past two years, meaning 10% to 15% of purchases are from abroad. In central London, only 27% of new homes went to UK buyers. More than half were sold to buyers from Singapore, Hong Kong, China, Malaysia and Russia."

And we can probably expect to see more of this sort of thing, at least until April 2015, when Chancellor George Osborne will close a loophole which currently allows overseas investors to avoid paying capital gains tax (CGT) on any profit made from property. At a higher rate of 28%, this means a foreign buyer who buys a property for £2m then sells it for £6m will pay zero tax but a UK resident will pay up to £1,120,000. Obviously, this isn't the ideal incentive to deter foreign investment. But let's face it, if you're stumping up a few million quid in the first place, as the report points out, 28% is still lower than Paris and New York and we're not talking about people scraping together 10% for a deposit.

But what can we do about it? Well, despite our headline, an outright ban is out of the question, mainly because EU law states that Britain can't stop EU citizens buying property here, but there are also other reasons which we'll come back to shortly. This is where Australia comes in. The Civitas report highlights a system where all foreign non-residents and short term visa holders must apply to the Foreign Investment Review Board (FIRB) if they want to buy property in Australia. The property they buy must add to the housing stock (i.e. off-plan purchases or vacant land for development). Ultimately, requiring people who buy property in London but live elsewhere to ensure that their purchase funds the creation of another home means that property can still be an investment, but not at the expense of restricting housing stock.

Right, those other reasons. As we reported last year, overseas investment makes many developments financially viable and Boris Johnson makes a valid point that we shouldn't put the blame for London's housing bubble squarely on foreign investors. But, if Britain is a safe haven now, what happens in five years' time when Johannesburg is suddenly the new London? So while using foreign investment as a crutch for housing development, it shouldn't become a false leg.

Which brings us on to the overseas investors who buy to let. Renting has got something of a bad rep in Britain — partly because as a nation we're obsessed with owning our own homes (or asking the bank to own them and let us live in them) and partly because tenants have fewer rights in Britain than in mainland Europe.

Lenders' restrictions on who can buy following the mortgage free-for-all pre-2008 have limited the number of people who can buy, so demand for rental properties goes up and as a consequence so does the cost of rent. Being a landlord doesn't make a property owner inherently evil, but a combination of high demand, absentee landlords in different time zones and lackadaisical regulation of letting agents mean tenants pay through the nose and get a raw deal. Again, it's a great investment opportunity for landlords — properties don't lose value and with a steady supply of people migrating to London from elsewhere in Britain and around the world, income from rent is guaranteed.

Last year, the government made proposals to improve the rental market, including options for longer tenancies to avoid that six monthly headache of moving house or paying fees to stay, cutting unreasonable fees and increasing protection for tenants whose landlords have defaulted on their mortgage. We'll let you decide on whether you think rent controls are a good idea or not.

So to answer our own question, a simple ban won't solve London's housing crisis. What could solve it is a model similar to that in Australia which still allows foreign investment but also builds more homes. What would also help would be restricting the ability to avoid stamp duty by buying through offshore organisations, make affordable housing actually affordable, and for heaven's sake, stop cutting affordable housing allocations in the first place.

Photo by Nick Richards in the Londonist Flickr pool.