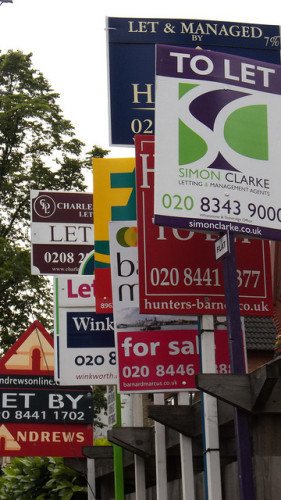 House prices in London have hit another eyewatering high, as Rightmove calculates that the average asking price across the capital has jumped 13.8% over the year, to £544,232.

The increase from last month is 10.2%, though from an admittedly slow September, but all the same Rightmove describes the rise as "unsustainable". It's certainly not going to do much for fears that London's experiencing a property bubble. Also interesting is Rightmove's analysis of what's pushing up prices – laying some of the blame at the feet of overseas investors:

London is a world city where overseas investors see real estate as a safe asset, at a time when safe assets are increasingly scarce, and developers are building and marketing a lot of one and two bedroom flats to meet that demand. While they can achieve volume sales at premium prices, this eats up a much needed source of fresh supply and drags up existing property prices at an even faster rate.

We've already seen that foreign investors are snapping up nearly 75% of inner London's new build property, as developers market off-plan sales in places like Malaysia and Singapore. It's a practice that obviously stops Londoners getting on the property ladder with a home to live in rather than "achieve optimum rent levels" or some such investment jargon. With increasing house prices and buy-to-invest comes increased rents, more and more working people claiming housing benefit, general housing chaos.

However, in his Telegraph column today Boris Johnson makes the point that overseas investors make many housing developments viable:

It is precisely this overseas demand that is critical to the economics of many of the developments. In case you hadn’t noticed, our UK banks’ balances were shot to pieces in 2008, and we have a huge national deficit. We need to keep that investment flowing.

Banks won't lend without a guarantee of return; UK residents tend to be wary of buying off-plan (i.e., before we can see what our home looks like) hence developers turn abroad. But this leads to Generation Rent (fine on the continent where tenants have more rights, less so here) and developments bragging of having "no social housing". We also can't be the only ones wondering what happens when the bubble – as this surely is – bursts, and investors start looking at other countries to park their money. Wouldn't we be better off with a different way of financing house building?