London's New Crop Of Affordable Homes Not That Affordable 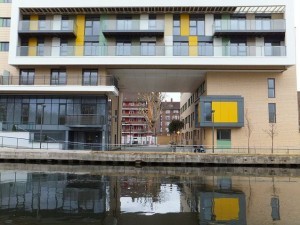 Yesterday we saw how the numbers of affordable homes being built in London is slowing down. While researching that article we came across some figures from City Hall showing just how much various boroughs are charging to live in these newly built homes, which we think adds weight to our long-argued position that these places aren't what most of us would consider affordable.

Bit of background: in 2011, a change was made to the way affordable home construction is funded. The Affordable Homes Programme, which runs 2011-2015, has £4.5bn to spend on building homes in England. This is nearly £4bn less than the previous scheme, the National Affordable Housing Programme, had to spend between 2008 and 2011. To deal with this gap, a new way of renting was introduced called Affordable Rent. This allows landlords (councils, housing associations – not private landlords) to charge rents of up to 80% of 'market rent'; in other words, 80% of the going rate in the local private rented sector.

City Hall has embraced Affordable Rent. Any borough wanting money from the Mayor's housing programmes to build new properties must agree to charge no more than 80% of market rent. But while boroughs have the freedom to set rent levels at any point below 80%, they have to allow developers to recoup the cost of construction and also contribute to the average Affordable Rent across London being a City Hall-mandated 65% of market rent.

So down to the actual rent levels. Barnet only has eight homes built under the Affordable Homes Programme and the borough reckons they come in at 58% of market rent. But its only two bedroom flat has a weekly rent of £264, about £1,135 a month. A very quick search on Zoopla produced at least 50 two bedroom properties for less money (we then got bored of counting). This 'affordable rent' flat would be out of the reach of one person working full time on minimum and London Living Wage without resorting to housing benefit. What we don't know is exactly where this two bedroom flat is (if it's in Hampstead Garden Suburb, maybe £264 a week genuinely is 58% of market rent), or how Barnet is calculating 'market rent' as it's left open to interpretation. Nor do we know whether any of those flats on Zoopla accept tenants on housing benefit or what state the flats are in. Barnet's seven Affordable Homes with three or more bedrooms cost an average of £290 a week.

The next most expensive two bedroom flats are in Bromley, where there are five averaging £199 a week (approx £855 a month). Again on Zoopla we found four properties that would cost less on the open market (all caveats from the paragraph above apply). The borough also has eight larger properties available for an average of £232 a week.

Back to the pricey: Hillingdon has seven one bedroom flats at an average £188 a week rent, or £808 a month. The bottom end of the private rental market in the borough is around £900pcm. Richmond's four average £190pw two bedroom flats appear to be subsidising its two average £200pw three+ bedroom properties, which is sensible, but neither are exactly cheap.

The last time we calculated how much money low income Londoners had to spend on rent, we worked out that a single adult working full time on minimum wage would have £1,006 a month once travel, food and bills were accounted for (but not clothes, childcare, toiletries, emergencies). One adult on London Living Wage would have £1,979 a month. Two adults on minimum wage would have £1,297 a month and on London Living Wage, £2,561. Seen from this perspective, few of these 'affordable homes' are affordable without housing benefit.

And that's the ridiculous thing. The government has tried to save money by pushing the costs of construction onto developers, who in turn can recoup the money from tenants. But that just puts the pressure back on housing benefit – same government, different department. What's also worrying is that the government's plan is to have providers convert the much cheaper social rent tenancies into Affordable Rent, or risk not being able to access funding.

You can see Affordable Rents charged in all boroughs in the document Affordable Housing additional information (PDF) on the GLA website.

Photo by Andrew Smith from the Londonist Flickr pool