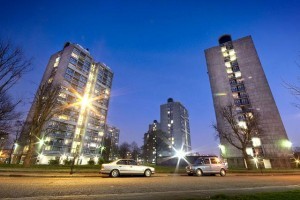 So London needs about 809,000 more homes by 2021 if we're all to be comfortably housed without having to sell a kidney to afford the rent. In the past, councils have stepped in and built homes for those on low incomes. A new report from the London Assembly takes a look at what's stopping councils from doing that now.

What we call council housing is a specific type of housing that's let out at a 'social rent' level. This is 40-60% of what's being charged at the normal market rate. You might have heard talk of 'affordable rent', which is a new model brought in by the coalition government, which allows housing providers to charge up to 80% of market rates (which of course, in some areas of London, isn't affordable at all). The London average for new affordable rent homes will be 65% across London – still higher than social rent.

So if you're on a low income, you really, really want a council house. There are around 400,000 council homes around London, housing about 1 in 8 of us. Yet there are 380,000 people on waiting lists, and it's estimated that only about 500 new council homes will be built for social rent over the next year (the vast majority of homes are being built as affordable rent; all the money from City Hall is going towards that model). That's compared with 1,000 council homes sold under Right to Buy in 2012-13. We're not even replacing what we have.

Why? There are a few reasons, but the biggest is a Treasury-imposed cap on councils borrowing money using their existing housing stock as assets. The way the UK calculates its national debt includes these borrowing figures (most countries in Europe don't) so the government is keen to keep a lid on anything that could increase the debt figures. The effect is that councils can't use their hefty assets to secure loans and can't invest in larger scale regenerations which might be more economical than what's described as 'sticking plaster' refurbishments under the Decent Homes Standard. (Decent Homes refurbishments are also sucking money from councils' Housing Revenue Account, which is the bit of the budget the government is capping.)

The report has joined calls from London Councils on the government to lift the cap and allow boroughs to borrow to build more social housing. It won't solve the problem on its own, but could make a useful contribution. However, there is one note of caution. Last month, (now former) housing minister Mark Prisk warned housing associations that funding to build new affordable rent homes will be denied to those that don't start converting their existing social rent properties to affordable rent (in other words, put the rent up). Even if this principle isn't applied to councils, anything they manage to provide may end up being offset by existing social rent homes becoming less affordable.

Photo by World of Tim from the Londonist Flickr pool