Fresh Off the Boat: Two Plays About Immigration @ Hen & Chickens 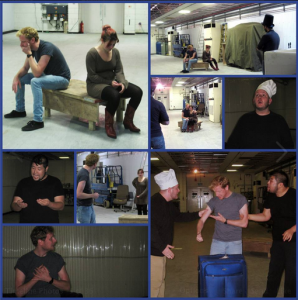 Paradigm Theatre Company (previously of The Inappropriateness of Love and Freedom, Flowers, Books, and the Moon) have a new show on, which is actually two shows of thirty minutes apiece based on two real-life stories.

The first, A Border Story, recounts writer Sarah Pitard's own recent visa troubles which left her and her husband stranded in France. The fictionalised version is a kinetic, funny, and self-aware telling, as honest as this sort of thing ought to be, casting the main characters often unsympathetic, but never "not real." Stars-slash-stand ins Lee Lytle and Paul Tonkin deliver their performances with gusto, turning to the audience for chatty asides that lend a sort of much-needed levity.

So it's weird to come back after the interval for the second half, The Utility People, for a more broad and farcical kind of comedy. This one is, we're told, based on the true-life story of a hyper-liberal couple who discover a small immigrant family living in their utility cupboard and proceed to exploit the living daylights out of them. JUST LIKE OUR CORRUPT NATION. It's funny, and especially as Oliver Gatz relishes his time on stage as our narrator, but it's a little too on-the-nose to really work as a satire for a full half-hour. It feels like a sketch that went on too long.

Still, it's funny, and that's honestly enough. It's dark subject matter, and The Utility People draws attention to the important stuff. The same goes for A Border Story, which features a scene in which TK tries and fails to get his story to a largely uninterested media.

So Fresh Off the Boat is good, funny stuff, and definitely thought-provoking, but the discrepancy of tone between its two halves make for an uneven experience.

Fresh Off the Boat is at the Hen & Chickens Theatre Bar in Islington until the 12th October. Tickets can be found at Unrestricted View.