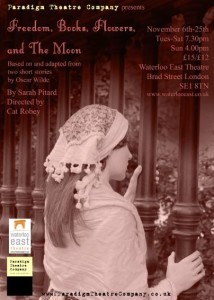 We do not understand the Waterloo East Theatre. It took us a little while to figure out that the trains rumbling overhead were not actually part of the soundtrack: at times the ominous thunder was a nice touch for which we had been willing to credit the Paradigm Theatre Company. Instead, props go to TFL for what must be the first time in living memory.

The play itself - Freedom, Books, Flowers, and the Moon suffers from the tiny space, although the set and costume design is uninspired, slightly obvious. What writer Sarah Pitard and director Cat Robey have done for this production is to shift Oscar Wilde's short stories The Nightingale and the Rose and The Happy Prince to the Nazi regime, changing all the characters to Gypsies in Germany and the stories themselves into something rather different as a result.

Freedom, Books... is a "loose adaptation" so fans of Oscar Wilde (which really, in the theatre-going community, is pretty much everybody) might take issue with that.

In particular, The Nightingale suffers from the change in setting. Wilde's signature moral relativism is rubbed out by the sudden and jarring introduction of Nazi officers into the story. The setting is introduced in the programme, but not built into the new world of the story, so it becomes a little strange.

An overzealous lead performance and a script too direct to support it doesn't exactly help matters, either. That's without mentioning the projected footage of a Nazi march to round off the play, which is about as cloying as it sounds.

But during the interval, the set is changed around for The Happy Prince, which is so much better. This second "act" is much more coherent: shifting the setting to WWII Germany, the Swallow helping the Prince save people from the concentration camps, makes for an interesting modern fairytale.

The lead performances in this second half are amazing, too. Bethan Hanks as the Swallow's stand-in Isabella is naive and hilarious and layered. She is amazing right up until a very on-the-nose speech at the climax, which is followed again by some projector footage.

Right up until that, though, we were completely with it. Freedom, Books, Flowers, and the Moon is half-recommended.

Freedom, Books, Flowers, and the Moon plays at the Waterloo East Theatre until the 25th November 2012. Tickets are available here for £15/£12 (concs.).