Theatre Review: The Inappropriateness of Love @ Hen And Chickens

By Londonist Last edited 109 months ago
Londonist Theatre Review: The Inappropriateness of Love @ Hen And Chickens 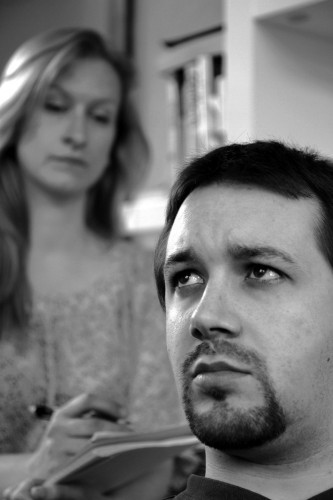 Scooter, your common-or-garden computer nerd, needs a date for an upcoming wedding, and he finds himself in a weird love polygon with his therapist, his best friend and his co-worker.

This is the basic plot synopsis of The Inappropriateness of Love, the Paradigm Theatre Company's first full-length production since their formation in January. It's a very modern play with all the disconnect that implies: that love polygon goes on in phonecalls and stilted face-to-face conversations, and nobody ever seems able to just say what they want to say.

It's well-written, but some members of the ensemble are better developed than others, leaving a couple of weak elements. That's not to say the cast doesn't do well with the material — particular hats come off to Lee Lytle and Mark Arnold as the best friend and boss of our hero — but the end result feels more like a slightly serious sitcom than a dramatic production.

However, the simultaneous conversations are so well-choreographed it's easy to forget such minor niggles. Scraps of dialogue overlap between conversations, highlighting or contrasting or simply entertaining. It's very impressive, even though it takes some getting used to. Really, Sarah E Pitard's speciality is in her dialogue, which is heightened (as it ought to be in comedy) without sacrificing much in realism. So it's easy to buy into Scooter's dilemmas, at least, and while the subplot about his parents is slightly out-of-sync with the rest of the play it's a little bit heartbreaking and all too relatable.

The Inappropriateness of Love is nothing Earth-shattering, but it's solid.

The Inappropriateness of Love is on until 29 September at the Hen & Chickens Theatre. Tickets are available here for £12 (£10 concessions).