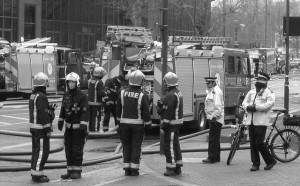 Not that the Fire Authority (LFEPA) wanted to. Members got legal advice for whether they could continue to oppose the Mayor's directive that the plans be implemented (we should point out here that the left-leaning parties have a majority on LFEPA at the moment, so it's their wishes that tend to get carried). The legal advice came back that if they refused to go ahead, the Mayor would be able to bring in the courts "on the footing that the Authority's failure to comply is unlawful" and that individual LFEPA members could find themselves facing contempt of court charges. In short, they didn't have a leg to stand on (Mayorwatch has kindly tweeted the legal advice: page 1, page 2). You might wonder what the point of LFEPA is, then, other than to rubber-stamp the Mayor's decisions. We couldn't possibly comment.

Cutting the fire service has proved extremely controversial. Over 90% of Londoners responding to the consultation were against the cuts; Islington, Camden, Southwark and Tower Hamlets councils have said they'll seek a judicial review; and this week's Mayor's Question Time saw Boris Johnson telling Assembly Member Andrew Dismore to "get stuffed" and muttering "bollocks" not-so-under his breath after hecklers called him a liar. And all for savings of £28.8m over two years as Boris rebalances the budget to give Londoners a 7p a week council tax cut. £28.8m. That's half the cable car.

The effect will be to push nearly half the city's wards over the fire engine response target (currently 267 out of 624 wards miss out; the plans add another 41, but bring just a few in). We are less likely to die in fires these days, but that's more because of fire-retardant furniture and safety campaigns than with how quickly fires spread.

Photo by Flamenco Sun from the Londonist Flickr pool