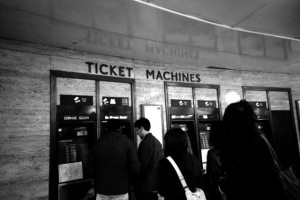 The Evening Standard has got hold of a Transport for London document that suggests closing the ticket office at every single tube station and replacing them with around 20 large 'travel centres', in a bid to save money.

TfL got hit by a £220m cut in its government grant for 2015-16 during the June spending review, and closing all ticket offices is apparently one way TfL thinks it can fill the hole. This isn't the first time the idea's been mooted: Boris Johnson reversed similar plans by Ken Livingstone in 2008. Reduced opening hours across the network were introduced in 2011.

Increased use of ticket machines means ticket offices are being used less and less, but they're still necessary for when the damn thing stops working, runs out of change or won't sell you a travelcard for the time period you want because your Oyster card is so old you didn't register it when you got it and that's a necessity now (this last one may be from our personal experience).

TfL also believes that closing ticket offices gets staff out from behind glass and onto the gateline; which in one way is sensible, but equally, a manned ticket office is the one place you know you can find someone if you need help. The TSSA union estimates such closures could mean the loss of 2,000 jobs, though TfL won't make a firm comment either way.

This idea of big 'travel centres' (presumably in the main stations; the ES cites Waterloo, Euston and King's Cross) is just another in the trend for closing local services and centralising or amalgamating them: Post Offices going into WH Smiths, local police front counters into your neighbourhood coffee shop, your local A&E turned into an Urgent Care Centre. It saves money but is more frustrating for the people made to travel further and queue longer.

We could point to the amount of money TfL is losing on the cable car and cycle hire, partly down to sponsorship deals that offer much for the sponsor but not as much as you'd expect for TfL; or how each health and safety officer on the New Bus for London costs £62k a year, and wonder whether some of that could be redirected into keeping at least some ticket offices as a basic public service. But looking back at how often this crops up, we suspect it's something TfL has been wanting to implement for some time.

Photo by Luica Mak from the Londonist Flickr pool.