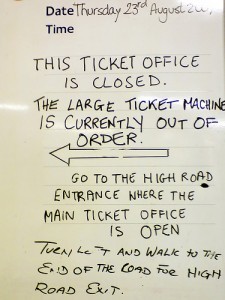 The much-disputed changes to ticket office opening hours are to go ahead this week despite the lack of agreement between London Underground and the unions over cutbacks.

TfL announced today that, as of Sunday 6 February, new opening hours will be introduced that will see staff moved from behind the ticket desk to ‘areas of stations where they can assist passengers most effectively'. As many Londoners will remember, the proposed changes have been a major bone of contention between LU management and the unions — the strikes last year were the result of a deadlock between both parties over the negotiation table.

The Guardian’s Dave Hill got responses to LU’s announcement from both union leaders:

‘Boris is jumping the gun by bringing in these changes while the safety review is still continuing at ACAS. He is now pre-judging the outcome of those talks which have already agreed changes to the sweeping cutbacks he announced last year.’ So says Gerry Doherty of the TSSA. Meanwhile, the RMT’s Bob Crow was as understated as ever:

‘This announcement confirms the lethal plans leaked by RMT to leave a third of our stations unstaffed [are] turning the tube into a criminal's paradise. Even before these dangerous new rosters are bulldozed into place we have stations unstaffed late at night with at least one brutal assault at West Finchley and that's a taste of what's to come. These staffing and ticket office cuts nail Boris Johnson's lie that no station will be left unstaffed at any time and will leave those responsible with blood on their hands.’

While LU say that all stations will continue to be staffed while services are running, a document leaked by the RMT last year suggested that the cutbacks could in fact mean more stations being left unstaffed, a detail that they claim LU is well aware of. Only last week, the RMT revealed that five stations on the Central Line were left unstaffed as a result of cuts. But will the presence of staff at a station prevent it turning into a ‘criminal’s paradise’ as Bob Crow puts it?

LU also say that increased use of Oyster has led to a decline in the need for ticket offices — according to TfL, more than 80% of all tube journeys and more than 90% of all bus journeys use Oyster. Around 38% of all Tube journeys and 21% of all bus journeys are made using Oyster Pay As You Go, so it’s a reasonable claim though anyone who’s tried to coax a ticket or their money out of a recalcitrant ticket machine may lament the lack of actual people to buy tickets from.

Bob Crow promised Londoners last year that strike action would escalate in the new year, looks like LU are throwing down a gauntlet.