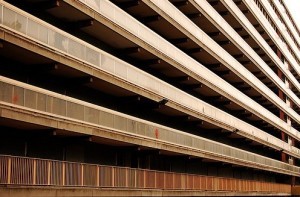 Another day, another report containing more bad news for London's renters. New research by Centre for London shows the proportion of rental costs have gone up. At the same time, the numbers of people renting privately in the capital has increased from 18% two years ago to 25% today.

Last week, we highlighted the extent of foreign investment buyers in the capital's housing market and its impact on local people, many of whom are being priced out of their communities. It goes without saying that the massive increase in renting in London has been driven by a property market in which few can afford to buy. Centre for London's report confirms what we already knew — that thwarted buyers are being pushed still further out by spiralling rents.

As a proportion of household income, rental costs have gone up from from 21% in 2001/02 to 27% in 2010/11. And that's not including the prohibitive upfront costs involved in renting.

Unsurprisingly, there has also been an increase in complaints about sub-standard rental properties and lackadaisical landlords. But what about the newly-launched London Rental Standard, we hear you cry. Well, it's all very laudable, but given that it's voluntary, the chances of rogue landlords bothering to register themselves is somewhere between none and zero. Enforcement is also down to local authorities, themselves stretched to the limits by government cuts.

One of the legacies of the buy-to-let boom is a swathe of landlords who simply don't have a clue what they're doing or think that they don't need to abide by the terms set out in tenancy agreements. Chuck in a high volume of young foreign tenants who aren't aware of their rights and things get even more difficult. Director of Centre for London Ben Rogers said:

"London prides itself on being a world class city, but options on offer to people renting in the city are rarely world class. This report set out a carrot and stick approach to raising standards.

You can read the report, Stressed, A Review of London’s Private Rental Sector by Margarethe Theseira here.

Photo by Iris Jones in the Londonist Flickr pool.