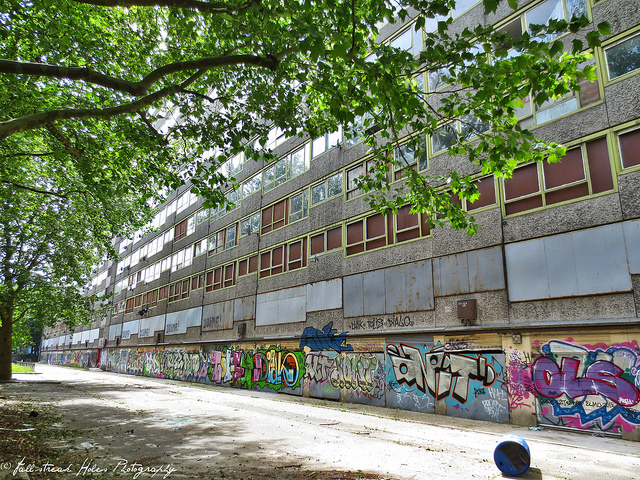 More miserable evidence of how London is becoming too expensive for Londoners to live in: leaseholders from the Heygate Estate can't afford a home on the new developments and have moved as far as Slough, and it turns out that nearly 75% of new inner London home purchases in 2012 were by overseas investors.

Let's look first at the Heygate Estate. Leaseholders – in other words, people with an ex-council flat under Right to Buy (not always the original tenant by this stage) – were offered compensation in return for the place being torn down. A one bedroom flat was deemed to be worth around £93k, but studios in the new development, called Trafalgar Place, start at £330k. We did a property search and the cheapest currently on sale is a one bed at £355k, and for that you get 51m² of internal space: a 3.8m x 3.4m bedroom and open plan kitchen/living area. For £355k. Are you shitting us? No wonder the people who bought their own homes had little choice but to leave their community. The total provision for affordable housing (i.e., up to 80% of market rates) for the scheme is just 25%.

Another factor that's affecting Londoners' ability to afford somewhere to live is the creep of investment purchases. Foreign investors used to be interested mainly in high-end property, but the Financial Times has figures to suggest the weak pound is attracting buyers into more ordinary developments, bringing them into competition with middle income Londoners. It's a common practice for estate agents to sell homes "off plan", before construction begins, to investors in places like Singapore, Malaysia and Hong Kong. It's interesting that off-plan sales to "locals" for the Battersea Power Station development were described as "unprecedented" at 75%, before the rest were hoiked off to the Far East.

Developers argue that without foreign investment, banks would never agree the loans to allow construction to begin. This suggests to us that perhaps the government needs to step in and guarantee these kind of developments. We need high rates of housebuilding to crack the housing crisis, but not if most of it ends up belonging to non-Londoners.

You might wonder why we're getting annoyed about all this overseas investment if it means London gets more homes. Well, with the Mayor rejecting reforms of the private rented sector and putting all his hopes of solving the housing crisis on building, it doesn't do us much good if the majority of these new homes are out of our hands before they're even built. Fewer homes available to buy means more people renting; but the UK isn't set up to cope with long term, or even lifetime, renters like the continent. We don't have protections like long, secure tenancies or caps on annual rent increases, so more renters means more people living without security and more transient communities. There's also some evidence that investors help push prices upwards.

Anything that inflates the, already ridiculous, market is a bad thing. People on low incomes already struggle to live here. In a recent article about gentrification, The Guardian quotes Dr Rowland Atkinson, an urban studies expert at York University, on the effect of dividing a city into rich and poor (in our case, inner and outer London), rather than mixed, areas:

"What you see now is that the central city becomes a playground for the rich. It feels insulated from social difference and from poverty. The physical structure of the city thereby supports a kind of social politics which is absented of debates about how we accommodate people who are different from ourselves."

And that's really not a London we want to live in.