Later this year, the Museum of London will centre an exhibition around the Cheapside Hoard. This enigmatic treasure was discovered in a basement in Cheapside in 1912. It comprises a priceless cache of gems and jewellery from the late 16th and early 17th century. Nobody knows who put it there, for what reason, or why it was never reclaimed.

Inspired by this story, and in preparation for Museums at Night, we asked a few curators to nominate further mystery objects from London's museums. 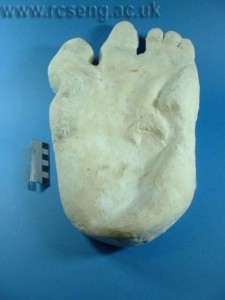 The Hunterian Museum in Lincoln's Inn Fields is surely some kind of world leader for unusual and intriguing exhibits. When we got in touch with our 'mystery' idea, they initially suggested a number of anatomical curiosities and preparations, but nothing quite fitted the bill.

Then, almost in passing, they suggested we take a look at the ‘yeti’ foot cast. Indeed, the museum has a whole load of yeti bits – teeth, hair, faeces — courtesy of Osman Hill who spent many years checking out ‘evidence’ of the elusive beasts in the Himalayas.

Alas, the museum has little further information about these cryptozoological remains, but here's the catalogue record for the foot cast. 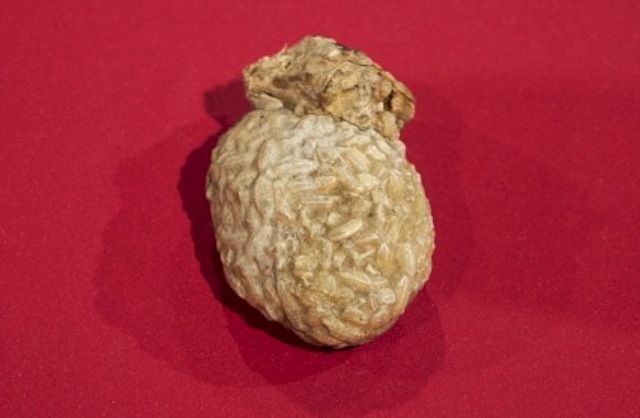 Looking something like a wasps' nest, this bulbous artefact from Wellcome Collection is actually human remains. The label reckons it's a gall bladder, taken from an executed Chinese criminal and stuffed with rice (we'd suggest using Uncle Ben's, but other gall bladders are available). This ghastly wonton was apparently used to treat severe illnesses, but details on how, why, when, or whether it came with a spicy sauce are sadly missing. Indeed, Wellcome Collection isn't sure it's even a genuine traditional Chinese medicine, and wonders if our readers have any information. The label only notes that the specimen is "one of the more intriguing items from Henry Wellcome's collection". 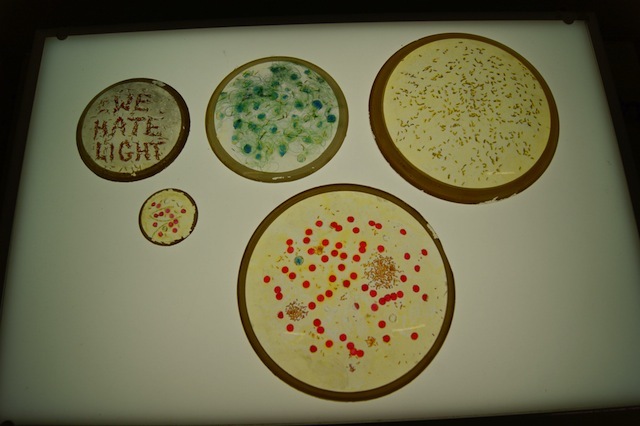 The Science Museum is pretty confident of its holdings, with detailed provenance records of most objects. But these unusual glass slides are a real mystery. The curators have no idea where they come from or who made them, but speculate that they are some sort of lantern slide for teaching about bacteria. Any clues? 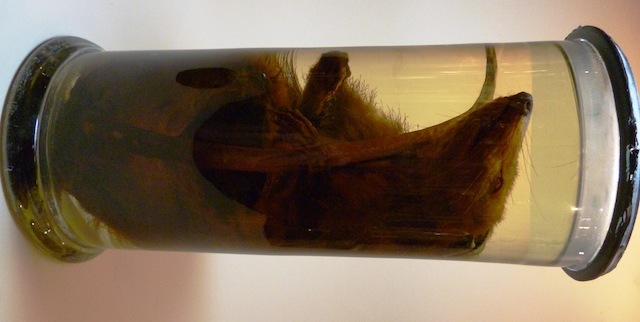 The Grant Museum of Zoology is another treasure trove of the peculiar. But few of its specimens can be as unusual as the opossum pictured above. A couple of years ago, a conservator noticed that the fluid was looking a little discoloured, with a yellow growth near the stomach. After opening the flask, analysis "Could not distinguish fluid type; odour suggests the fluid is not formalin, the fluid was also not registered as alcohol by the fluid density meter." And then a greater mystery: "Yellow coloured growth from stomach area transpired to be wods of cotton wool (orange tinted) which had been stuffed inside the specimen. On removal, a D-type Duracell battery was removed from the body cavity (organs seem to be removed)." Why on earth would anyone put a battery inside an opossum? As museum manager Jack Ashby notes, "Obviously the mind is led to some experiments in the evolution of the Duracell bunny".

The Museum of London throws some unusual shapes at us. The object on the left is a prehistoric ‘tribrach’ – a three-pronged flint tool with no known purpose. Was it a throwing weapon, a primitive doll,  a fertility symbol, or maybe a work of art? Who knows...though we'd like to hear your speculations. The intriguing object to the right is a Roman bronze dodecahedron. These are found across the Roman Empire from Britain to Hungary, and vary in size from 4 cm to 11 cm diameter. Nobody knows what they were used for. Possibilities include a surveying instrument, candle holder or a religious ritual object. We think it's something to do with Doctor Who.

We'd love to hear from curators at other London museums and run a 'part 2' of these features soon. Get in touch with matt@londonist.com if you have further examples of mysterious, rude or gruesome exhibits.