Because our investigation into the number of nipples in the National Gallery went down so well, we thought we’d whip up another helping of high-brow smut. Perfect daytime entertainment for anyone planning an alternative stag or hen do.

Linley Sambourne was a reasonably well-to-do Victorian gent whose house on Stafford Terrace, Kensington is preserved for posterity. Among the period furniture and fittings can be found a fine collection of nude photography, the remnants of Sambourne's 'Camera Club'. The snap-happy Sambourne was also fond of candid street photography and secretly capturing the likeness of his sleeping maid. As Peter Watts concludes in his short post on the subject: "There’s nothing quite as creepy as a middle-aged Victorian male, is there?"

9. Posing Pouch at Museum of Croydon

You'll probably find ruder things on the streets of Croydon, but we had to include this for its sheer oddness. It's an Ann Summers' reptilian posing pouch from the 1980s, part of the museum's display of Croydon history. The mind boggles.

8. Flashing bat at the Horniman Museum


Cause it looks just like a dirty old man flashing his raincoat open. You'll find him on the balcony in the Horniman's Natural History Gallery. The Forest Hill attraction (which itself has a slightly rude name) also houses some Anableps four-eyed fish, which have left- or right-handed copulatory organs. This means that males can only mate with females of the correct orientation. We're told the aquarium only has one male able to breed with the one female, leaving a gang of very frustrated suitors of the wrong orientation.

"In armour complete did I engage her upon this noble edifice," boasts James Boswell of taking a prostitute on Westminster Bridge, thereby glorifying his own personal Johnson instead of the learned friend he's normally associated with. An example of such an 18th Century 'armour', adorned with delicate pink ribbons, can be examined at the Hunterian. Also on show is a series of diseased penises and a faulty rectum, which we abstain from reproducing on the off-chance that you're eating your lunch.


Humans are unusual among animals in lacking a penis bone. Of the creatures that do posses a pudendal scaffold, the walrus is king of the swingers. A hearty specimen graces the cabinets of the newly reopened Grant Museum. You can find additional penile delights nearby, including the barbed mousehood of some kind of rodent.

5. Min's Penis in the Petrie Museum

You know when you were a kid, and you waited by the letterbox for the newspaper, so you could draw Hitler moustaches, gap teeth and monocles on all the grinning faces inside? And then remember how you reached a certain age and your penmanship turned to endowing local councillors with droopy boobs or huge willies? Well, that.

4. The F Word at the Museum of London 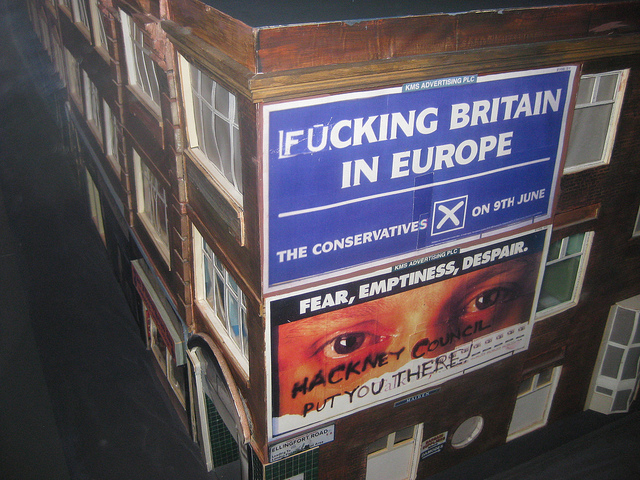 Kudos to the family-orientated museum for leaving this obscenity uncensored and at child's eye-level. The controversial message adorns Tom Hunter's model of a Hackney street, in the museum's new(ish) Galleries of Modern London.

3. Edwardian Vibrators at the Science Museum

Marketed at the time as 'vibrotherapy' for 'hysteria', this early 20th-Century contraption was no doubt put to ulterior purposes. The museum reckons to have over 40 vibrators, some of which look more 'user-friendly' than others.

The Romans were never ones to shy away from naughtiness, as exemplified by this priapic wind chime. The bronze decoration is centred on a winged penis, which supports more than the customary number of bells. You'll find it, appropriately, in Room 69 (Greek and Roman Life).

1. Sex In A Fruit, at Wellcome Collection

What's the strangest place you've ever had sex? This adaptable couple have selected a series of hinged porcelain fruit for their carnal encounters. No one's quite sure exactly when or where they come from. All we know is that we'll be subjecting our puritan great aunt's Fabergé egg collection to greater scrutiny next time we visit.

Those in search of further smut might take themselves to the Natural History Museum, where the current Sexual Nature exhibition examines the myriad ways that animals get it on.

If you want yet more filth, check out London's rudest window, and what must be the world's largest collection of prostitute cards at Wellcome Library.

With thanks to certain staff at the Hunterian Museum, Horniman Museum, Grant Museum and Wellcome Collection. You know who you are.