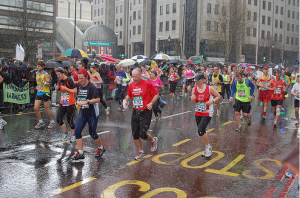 Organisers of this Sunday's London Marathon have announced that the event will still go ahead, following the fatal explosions at the finish line of yesterday's Boston Marathon. It seems increasingly clear that the blasts were caused by explosive devices, a scenario that has prompted organisers of the London event to review security measures with the Metropolitan Police. There is, however, no known specific or credible threat, according to an anonymous security official.

Crowds will also line the streets of London tomorrow, for the funeral procession of Margaret Thatcher. The already tightened security for that event will not be affected, according to a police statement. More over on BBC News.

Image of the London Marathon by McTumshie in the Londonist Flickr pool.