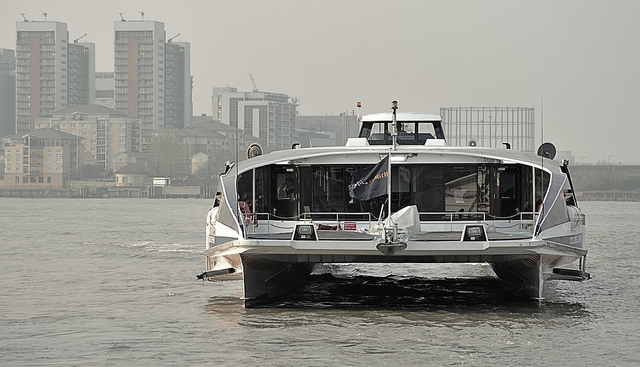 In the latest attempt to turn the Thames into an integral part of London's transport infrastructure, a report by Transport for London has mooted the idea of introducing eleven new river bus piers.

The River Action Plan (PDF) calls for improvements in the information and integration of London's river bus services. The report's key recommendations is introducing new stops, including ones at Battersea Power Station, Wapping, the Savoy and an eastward extension of the route to Barking. In total £10m is to be spent over the next seven years.

We've been here before, of course. In 2009 Boris Johnson promised a "revolution" in river services, which basically amounted to introducing a Canary Wharf - London Bridge "shuttle" service and bringing Oyster pay-as-you-go on board. It didn't do much good: last year the London Assembly highlighted failings on the mayor's pledge to increase annual river journeys to 12 million by 2020 (they're currently stalled at 6.5 million, including the Thames Clipper, Woolwich Ferry and charter services). Encouraging commuters to trust the river isn't helped when services are cut or offered at a premium.

Will new stops and better signs encourage commuters to get ship-shape? Possibly, although what would really make a difference would be if Oyster travelcards were to be accepted; users currently get a discount of one third off the standard fare. Doing so would help integrate the river into the transport network, but its a lesson TfL seem loathe to learn, as they've employed a similar no-travelcard policy on the cable car which, if reports are to be believed, as attracted a total of 16 regular commuters.