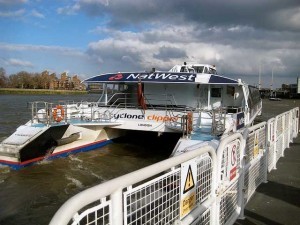 Last week I met with Mike Weston of TfL and can confirm that we intend to introduce a late evening service with 2 sailings departing from Embankment at 22:08 and 23:08, this is subject to TfL board approval on our proposed pricing as there will be no discounted tickets and our season ticket holders will be required to pay a supplement. This is the only way that we can see a late evening service being viable without any external financial support.

So, good news that some late night service will be re-introduced but bad news for season ticket holders who will be forced to pay a premium for the privilege. We can't blame users in the discussion group for suggesting cuts were just a cynical way to bring in a supplementary charge, given the view that the service is overpriced to start with. But some residents may be happy with the compromise, if the surcharge is cheaper than a cab home.

Or Thames Clippers could think outside the box, perhaps taking on one of the users' ideas: "I bet if it was called the Boris Boat, cost £2 per head, had the bar open and sold chips on the pier it would be full - and the bar would do huge business!"

On a related note, Andrew Gilligan has blogged about Boris Johnson's broken promises on the river, lamenting the year that has passed since the rather exciting 'Rate of Knots' report was published, envisioning a "Water-borne tube line for the Thames'.