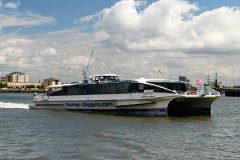 The Mayor has announced a "revolution" in river transport across London. From November, passengers who board the Thames Clippers service will be able to swipe their PAYG Oyster card on-board to pay their fare. A new rush-hour shuttle service between Canary Wharf and London Bridge was also announced, alongside a £1.5 million upgrade to Tower Pier, as Mr. Johnson vowed that the river would become "a major part of the transport network" for commuters and not just presumptuous pop stars.

Furthermore, the Mayor's director of transport policy is to oversee a "river concordat" that operators, pier owners and councils will sign up to, which will improve ticketing and passenger information, in the hope of getting everything ship-shape before the Olympics comes to town.

All good news, but does this really count as a revolutionary act? River services across the capital are still limited and expensive, with a trip from, say, London Bridge to Greenwich — a not uncommon journey on a summer weekend — costing five quid. Including the Thames Clipper as part of the Oyster prepay realm would be a good start — prepay users are currently entitled to a paltry 1/3rd off ticket prices.

Utilising the Thames as a key commuter corridor is a sound idea, and if done correctly should alleviate the strain put on existing road and rail networks, but as previous attempts have shown, it won't work if passengers feel they're being ask to pay a premium for their river route.