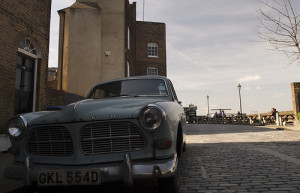 Last week, City Hall's Lib Dems called for annual congestion charge increases in line with public transport fares. The current charge of £10 (or £9 if you use auto pay) hasn't changed since London mayor Boris Johnson bumped it up from £8 in 2011, while fares for tube, bus and rail users have increased year on year.

London Assembly Liberal Democrat leader Caroline Pidgeon says that 'while fares have gone up at a faster rate than inflation the congestion charge has remained constant' and this 'means that over time driving is slowly becoming a more economic option.' Given the eye-watering cost of petrol and Vehicle Excise Duty (or 'road tax' as everyone else calls it), we weren't so sure that driving could be more economical but we decided to hunt out our calculator for a not very scientific comparison.

We've obviously made a few assumptions with our comparison — a tube journey is a return on zones 1-6 on Oyster Pay As You Go, a rail journey is a daily return from Brentwood, a bus journey is from Watford and our car is a typical small hatchback doing a 40 mile round trip. We're also not going to faff about with mpg or car maintenance costs because mpg figures are notoriously unreliable, especially in town driving, and servicing costs vary wildly depending where you go.

So there you have it. A bus journey is the cheapest, while driving is the most expensive, even without factoring in £20 per day to park. Cycling or walking would be cheaper still, but unless you have showers at work or your colleagues don't mind sitting near someone who smells riper than a road digger after a hard day's labour, it's not that viable for longer commutes — we can't all live in Hackney. We also wouldn't like to try walking from Watford every day.

In this comparison, car sharing is pretty much the only way driving becomes more economical so if you don't mind the teeth-grinding stress of driving in central London, have access to free parking and a friend or two, you may be onto a winner. If you own a hybrid rather than a petrol car like the example we used, you can knock a whopping £2160 off your annual driving bill though possibly not for much longer. Going electric would also remove the fuel and congestion charge element from the daily cost as well as doing your bit to prevent localised pollution.

Our figures for driving were based on £25 per week on petrol, VED of £135 per year and congestion charge at £9 per day. Our estimate of £20 per day to park is for Tower Hill NCP car park. Our calculations were made while in the grip of a hangover, should the keen-eyed among you spot any errors.