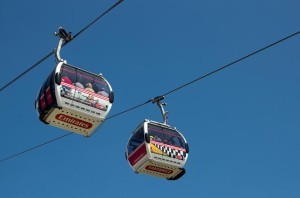 Transport for London has released passenger numbers for the new cable car, our first chance to see whether Londoners have taken the new mode of transport to their hearts.

Last Sunday (5 August) the Dangleway notched up its 500,000th passenger since opening on 28 June. Sounds impressive – and makes TfL's original projections of at least 1m passengers in the first year look unambitious – so we did a quick bit of maths to work out what that averages out to. It's a bit awkward because the cable car runs until midnight during the Olympics, rather than closing at 9pm, and starts up later on weekends, but we reckon it's been open for 552 hours to 11.30pm on 5 August. That's an average of 906 passengers per hour, rather less than the 2,500 capacity TfL announced when it opened.

Of course, this is an average: to work out whether the cable car is being used as a regular alternative to the DLR and Jubilee line hop to get to the same destinations it'd be more useful to have a breakdown of peak time passenger numbers and usage outside the Olympics. However, a couple of inferences can be drawn. On said Sunday 5 August there were 26,000 passengers (1,576 an hour), much higher than the daily average (again: average) of 12,820. That's either a lot of Games spectators moving between North Greenwich Arena and ExCel or it really is more of a tourist attraction.

It''s going to take a while to get a real handle on cable car usage (post Games, post traditional summer transport dip, post novelty value), but this is an interesting snapshot. We'll keep an eye on how it pans out, particularly as Emirates's sponsorship follows a similar line to the Barclays Cycle Hire model i.e., if performance targets aren't met, payments will be less than the headline £36m. We'd also love to hear from anyone who uses it regularly – let us know your experiences in the comments.