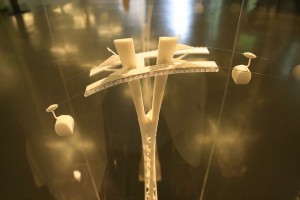 Yesterday's news that the Thames Cable Car costs have risen to £60m didn't surprise us that much - Caroline Pidgeon got an admission out of Boris in June that it was pushing the £57m mark - but what's made us eye-poppingly enraged is TfL telling the BBC that they're paying for it out of the rail budget.

If TfL were swimming in cash this would be fine, but this is the same TfL that's just announced PAYG fare increases of 10p per bus journey and an 8% rise for travelcards. A TfL that's committed to huge upgrades on the tube network (surely a nobler cause for raiding other parts of their budget?). A TfL that's expanding the Overground network and involved in Crossrail.

Len Duvall has asked the Mayor about fares and how many people are expected to use the cable car. Prices will be "set at a level which includes fares that are affordable for local people" and they reckon at least 1,000,000 people will swoop across the river in the first year. Where those numbers are from is not clear (what's also not clear is whether a more comprehensive answer is on its way), but it's a nice round number and sounds a lot. Until you do this:
1,000,000 people over 365 days = 2740 people per day
Assuming it operates 12 hours a day = 228.3 people per hour
The system will have a maximum capacity of about 2500 people per hour
North Greenwich station, close to one of the cable car's proposed start points, cleared around 27,500 people each weekday (12,000 on Sundays) in 2010.
(TfL can't get figures about Royal Victoria DLR to us before Monday.)

These are, to channel Boris for a moment, piffling numbers.

TfL say they're hoping to claw back the costs through commercial sponsorship, an application to the European Regional Development Fund and fares - but the first two aren't guaranteed (and if the project isn't finished by the Olympics, it will be a lot less attractive to companies hoping to plaster their logo over it). No wonder nobody's saying yet how much a trip will cost.

Photo by Ian Visits from the Londonist Flickr pool.