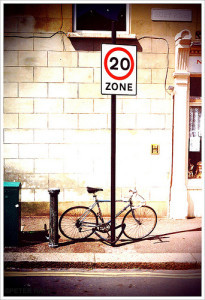 Camden council is considering plans for a borough-wide 20mph speed limit in a bid to cut accidents while encouraging walking and cycling.

A number of smaller roads in the borough already have a 20mph limit in place but the council propose to extend them to main roads.

Last year, Islington became the first borough to introduce a blanket 20mph limit, though the Metropolitan Police said it would not increase patrols to enforce the limit. Neighbouring Haringey and Hackey aren't automatically in favour though — the former objected to the limits on shared boundary roads and the latter only agreed to trial the scheme. The City of London also looked at reducing limits in 2011 while Enfield, in response to a petition, said it would consider a 20mph limit on a busy road.

20mph seems to have become the new black — early mayoral contender Christian Wolmar put reduced speed limits on his agenda for the future and it made frequent appearances in the manifestos for this year's candidates. Earlier this month, Green Party AM Darren Johnson campaigned for a 20mph limit at Elephant and Castle.

In August, a Department for Transport (DfT) report showed an increase in road casualties in 20mph zones, prompting questions over their effectiveness and whether or not widespread restrictions are appropriate. So are they being implemented appropriately?

There are three standard speed limits in the UK, 30mph, 60mph and 70mph. Any others such as 20mph, 40mph and 50mph are set by the local authority according to DfT guidance. The key objectives around a 20mph limit are that the limit should be self-enforcing without additional traffic-calming measures or reliance on the Police, they should be introduced in areas where the speed of traffic is already slow or where there's a particular risk (like outside a school) and that they shouldn’t be implemented on main or strategic roads.

There's clearly a case for 20mph limits in some areas but it's not a magic bullet — better road user awareness, observation, signage and road planning all play a part in reducing casualties. Improving cycling infrastructure would also go a long way towards making the roads safer for cyclists.

Live in Camden? There's a public meeting on improving transport and road safety on 17 October.