Christian Wolmar Throws His Hat Into The 2016 Mayoral Ring 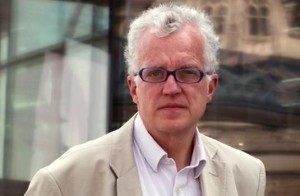 The dust has barely settled on the Mayoral election and we've already got a declared contender for Labour's candidate in 2016, hot on the heels of speculation about whether Boris Johnson will be heading back to Parliament after (or even before) his term ends.

If anyone can be described as a transport expert, Christian Wolmar is that person (though he prefers the term 'leading transport commentator'). With 20 years' experience writing about how we get around, and a couple of books under his belt, he's evidently lost patience with politicians and decided to try and change things himself.

His website Wolmar for London (no chummy Boris or Ken first name terms here) lays out a vision of London with an integrated transport policy. Neither previous Mayor, he says, had an overall plan, bottling or fudging real change and distracting from the real issues with election battles over bendy buses and fares. His plans for central London include reducing the number of cars coming in, more pedestrianised areas, 20mph zones, priority for buses and a one hour bus ticket (allowing changes for one fare), "permeable routes for cyclists" and a more focused congestion charge zone.

In outer London he wants to create better public transport to reduce car use – which would, in turn, reduce congestion for business and people who have to drive. He also has big ambitions for making cycling safer and more popular, to catapult London past Amsterdam and Copenhagen as the posterchild city for bikes.

It's a utopian vision and the thing about Wolmar is that not only does he clearly feel strongly about it, you know he has the experience and knowledge to back it up. So far the website is all about transport, but previous jobs at Release and Shelter indicate he's not just a one-trick pony. But is he well enough known to win an election that has always been a popularity contest? He's hardly a household name and (a shallow test, we know) he has just over 5,000 followers on Twitter. Perhaps that's why he's starting early. At least if Wolmar gets the Labour nomination (Alan Johnson is reported to be mulling over a bid) he won't be battling Boris, who's promised not to stand again in 2016.