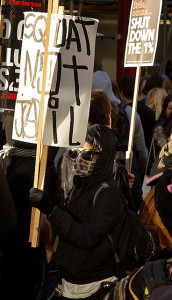 The law changes tomorrow to make squatting in a residential building a criminal offence. Previously squatters were dealt with under civil rules; it was perfectly possible to evict someone squatting in your home but it took time. Now if police believe a claim is genuine they can go in and make arrests. Anyone found guilty of the new offence faces a six month spell in jail, a £5,000 fine or both.

we're tipping the scales of justice back in favour of the homeowner and making the law crystal clear: entering a property with the intention of squatting will be a criminal offence.

However, with homelessness rising in London (it seems unlikely that the Mayor's commitment to end rough sleeping by 2012 will be met), introducing such a law without also addressing the capital's housing shortage feels shortsighted. Leslie Murphy of Crisis said

Ultimately the Government needs to tackle why homeless people squat in the first place by helping not punishing them.

Hitting a homeless person with a £5,000 fine (where are they supposed to get the money to pay it?) or putting them in prison won't make any difference to that's person's housing situation. What should be happening is a programme to build more housing and bring empty houses back into use. There is a fund to redevelop 10,700 of these, but it's a fraction of England's total of 720,000. Shapps seems to be talking about the tabloid stereotype of squatters breaking into middle class homes while the owners are on holiday, but it's these abandoned houses, to which the law also applies, that are the squatter's usual preference.

Another consequence could be a rise in squatting commercial properties, which aren't covered by the new law. There have also been fears that the law could be used against occupation-style protests, as it refers to 'trespass', although the vast majority of protests are carried out on commercial property.