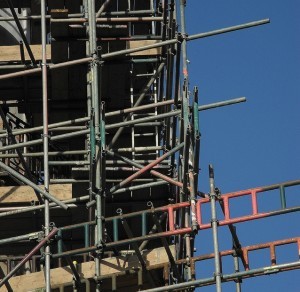 Londonist takes a look at what the campaigns are saying about themselves and each other.

One thing we'll hear a lot about over the next few months is affordable housing targets, and whether Boris has kept his promises. This is partly because the final totals for Boris's tenure won't be released until after the election and partly because comparisons between the current and former Mayors are bloody difficult to make, offering scope for campaigns to cherrypick their figures.

The Homes and Communities Agency (HCA) tallies statistics for affordable housing starts and completions, but because it was founded in 2008 it's not much help on Ken's record. The Department for Communities and Local Government (DCLG) has data on all housing going back to 1998-99 but breaks it down by local authority, housing association and private enterprise – and while some of that private enterprise housing will clearly be classed as affordable, the DCLG doesn't provide figures for London. They do have some nice charts about affordable housing supply in London but numbers are approximate.

Then there's a difference between how the HCA and DCLG calculate their figures. We worked out that for 2009-2010, the DCLG's figures show 13,855 affordable homes built in London (frustratingly, you usually have to hope they provide a handy stat about London in their key points and work back) while the HCA figures for that period are 15,114 starts and 12,772 completions.

So what do we know?

What don't we know?

Seen a campaign claim you want us to look into? Email us at tips@londonist.com. Photo by Stephen*Iliffe from the Londonist Flickr pool.