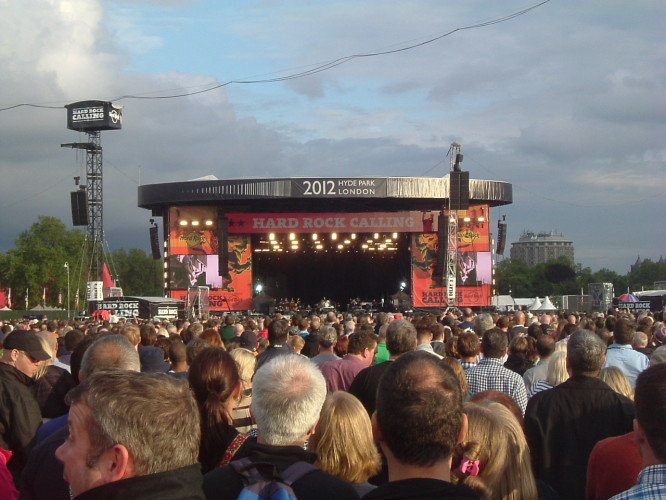 Hard Rock Calling rarely holds any surprises. The headliners and going to be huge and the Marshalls will be stacked up, But never has the power of rock music been so visible than at this year’s event. The importance of this year’s event contributed to the cancellation of Hit factory Live to make the site safe; this festival had to go ahead.

Bruce Springsteen even weighed in while Westminster council were debating the future of Hyde Park gigs. But despite Hyde Park’s notorious volume and clarity failings, nothing was going to stop this weekend from rocking out.

Although London’s rock n roll heart was suppressed by bureaucratic killjoys when Bruce Springsteen’s performance with Sir Paul McCartney was cut short during The Boss’ headline slot, the power of the axe had firmly asserted itself.

Indeed Springsteen’s three and a half hour set was assuringly inspiring. Sauntering on stage in blue collar and waistcoat,  he gives a coy wave and has a little chat before starting a piano led rendition of Thunder Road, just a voice and keys, putting Hyde Park  in absolute silence. It’s a far cry from the relative amateurish shock and awe intro of a Coldplay concert.

A Springsteen set is always for the die-hards. Who else could tolerate a 15 minute band-jam roll calls, and the return of John Fogarty after his set of soft Americana earlier in the day? But a rawkus version of Because The Night, and final rewards of the trio of big hitters — Dancing In The Dark, Born In The USA and Born To Run —  convert the blackest of hearts.

It became OK for a new generation to like The Boss when the Moldy Peaches’ Adam Green released Born To Run as a B-side to his 2003 single Jessica. An appreciation for Paul Simon, however, is a much more recent occurrence. The afrobeat trend gripping discos owes a debt to 1987’s Gracelands, which for many of us is still the album of endless late 80’s car journeys.

Simon dictates the set in two parts, his non-Gracelands back catalogue, including appearances by Jimmy Cliff and Hugh Masekela, followed by a complete band change for the arrival of Ladysmith Black Mambazo and the original touring band. The Boy In The Bubble’s accordion, Call Me Al’s horns and Mambazo’s synchronised harmonies sending Hyde Park crazy with memories of damp Cortinas and Going Live.

But it’s Simon himself who is the star, as he stuns everyone with spine shivering acoustic versions of The Boxer and Sound Of Silence, the undoubted highlights of the entire weekend.

While Springsteen and Simon signal the dominance of heritage acts, Friday’s headliners Soundgarden are the champions of the revival, a band who’ve finally come of age and look better than ever. Chris Cornell has matured into the coolest rock star imaginable in mid-length leather jacket and Matt Cameron, who finished touring with his side project, Pearl Jam, three days earlier, has his drums at stage level, simply letting his phenomenal expertise do the showing off for him.

They play tracks from all their albums, even Beyond The Wheel from Ultramagnetic Ok, but it’s Jesus Christ Pose followed by Black Hole Sun which really shake the earth. So much in fact that the heavens are appropriately shattered during the latter, causing the looming rain cloud to erupt. Cornell confesses he forgot to write a song on the set list so would play it in the encore. It’s Rusty Cage, a song so important to grunge teens it’s impossible to contain the excitement of the early 30s crowd.

They end with Slaves and Bulldozers, a song they didn’t play the only other time we’d seen them at Reading 95 and it’s truly phenomenal. It lingers in the air as Cornell and bassist Ben Shepherd play a dirgy kiss-chase which is teasingly hypnotic. Cornell announces this was a nostalgia set, and they’ll be back later in the year with new songs, they mean business.

The main stage's supporting line-up over the weekend was clearly to fill time until the megastars appeared. Lady Antebellum’s soft rock and Alison Kraus and Union Station’s vast county fail to ignite anything other than the gasoline powering middle America’s truck stops. Even Iggy and the Stooges’ timeless garage is tiresomely predictable. Of course Iggy Pop, will always be a writhing demi-god, but maybe it’s time to put a shirt on. At least Punch Brothers’ bespoke urban bluegrass was excitedly refined.

While Hard Rock Calling is undoubtedly for a more mature demographic, there is still an amazing array of exciting music on offer. The Hard Rock Rising Stage, which is wonderfully enclosed with bars and seating areas, hosts the first festival gig by Deap Vally whose liquor spittin’ garage rock is creakingly vintage and wonderfully vital. It makes up for a lacklustre show by The Launderettes who are fairly static on stage until the bassist starts getting into the groove, but their Hammond rock garage is too sedate.

The stage’s weekend highlight was a sparsely crowded headline slot by Dylan Le Blanc who appears after only three hours sleep. He’s joined by pedal steel legend BJ Cole for a half hour of beautiful Neil Young-esque melancholia which is wistfully gentlemanly with deep-south understatement.

On the outdoor bandstand Danny Shah plays the bland baladeering of an advert during Hollyoaks, and Daytona Lights chase the departing bandwagon with their catchy but instantly forgettable afropop. Luckily Drop Out Venus save a weak stage of wannabe’s with their juddering junk jazz, which is vitally ferocious and mesmerizingly intense. Their part Velvent Underground, part wide-eyed Wilko Johnson frantic nihilism might just be the greatest thing played in Hyde Park this year. Amazing.

Hard Rock Calling’s jaw dropping surprise is New York born rock goddess LP aka Laura Pergolizzi, her pixie Leo Sayer demeanour masking an awe-inspiring vocal talent on the Pepsi Max stage. She’s dressed exactly the same as Springsteen the night before, a statement of her intent to take on the rock world. Her musicians resemble a hodgepodge mariachi band, with a weedy multi-instrumentalist, a cartel-henchman drummer and a guitarist itching to be in Machine Head. As LP sings her feet scattily shuffle, before clamouring on the monitors to deliver an operatic sermon of vocal virtuosity. This is her first UK gig and she is mystifyingly captivating.

The Pepsi Max stage retains the huge volume and clarity experienced at Wireless, but Big Country fail to make the most of it, their trademark bagpipe guitars being lost under Mike Peters' bravado. Gary Clark Jr also falls short, mainly due to his backing band lacking the expertise needed to support his intense guitar playing. He’s still in training, but being supported by blues-rock standards is holding him back.

There is no such problem for Dawes who make the classic Laurel Canyon sound as relevant as ever by introducing pummelling drumming and driving bass line to Taylor Goldsmith's gripping voice. A Little Bit Of Everything sounds particularly close knit and inclusive, while securing their main stage destiny.

Hard Rock Calling knows exactly what it’s doing. The big bucks are in heritage acts, and they’re able to attract them with an iconic venue and a guaranteed audience, but it’s a festival which could try harder. The main stage lower order simply isn’t exciting enough, but booking acts like LP,  Drop Out Venus and Dylan Le Blanc shows their commitment to supporting rock music at all levels. It’s unfortunate that the main focus fell on the Springsteen debacle because Hard Rock Calling was an incredible success.