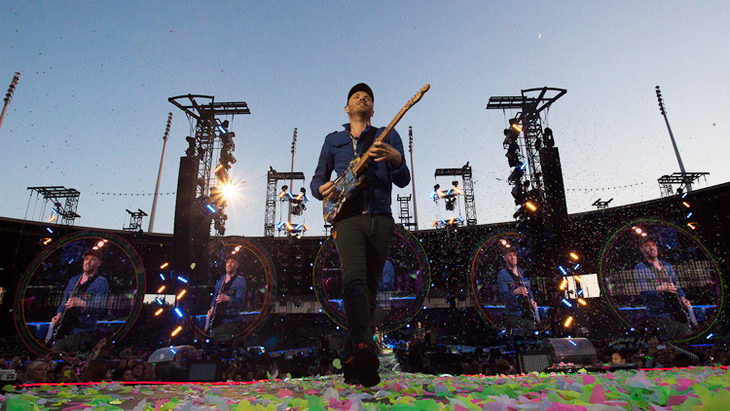 It is fitting that Coldplay are playing the Emirates stadium over three nights during Jubilee weekend; they’re the only band who can match the pomp and pageantry taking place throughout our city.

They’re undeniably the biggest band in the world so while the world watches London, they are flying the flag of great British music, and boy are they making themselves noticed over the gun salutes.

Stadium gigs are always detached, impersonal shows; four tiny blokes on a stage with a screen – thank you and goodnight. Not Coldplay; their Mylo Xyloto world tour is too small for stadia, so the setup has three performance areas – main stage, middle arena jam section and an acoustic stage for the back – a trick only employed by the U2s and Rolling Stones of the rock world. Catwalks for the obligatory rock star strutting jut out at three angles, and four giant screen discs in front of a massive neon banner covering the Clock End, mean London’s second stadium feels cocooned by the rock spectacle.

This is part of Coldplay’s charm. Love them or hate them (tending towards the latter to be honest – DN) the four piece have maintained their connection to their fans, even on such vast stages, having a humble appreciation of the fame bestowed upon them. Radio-controlled wristbands given to each attendee adds to this inclusiveness, everyone is part of the show as the bands' LED light flashes in time with the songs, filling the Emirates with pop dragonflies.

As they open with the thunderous Hurts Like Heaven the Emirates shimmers with twinkling lights, while laser lights dance on the North Bank End, and we are treated to a barrage of pyrotechnics. No one is paying attention to the music. Rather, everyone’s jaws drop at the spectacle. Then there’s more. In My Place explodes with confetti cannons which cover the stadium, and outside, with neon tissue butterflies and birds swirling around with the eddies.

Then there’s more. Major Minus combines the flashing wrist bands with more confetti. Then. There’s. More. Thirty neon balloons appear throughout the crowd like a slow motion Van Persie header for Major Minus. It’s been a visual onslaught and a perfect gambit. Even stadium show cynics (well, us) are in awe of what’s before us and swells the adrenaline ready for the heart of a Coldplay show – soaring melodic rock.

The highlight is Yellow, a song never written for stadiums, yet its intimacy is transformed into an epic rock anthem, and Islington hasn’t heard a sing-a-long like it. The audience are vocal throughout, which is visibly moving to Chris Martin – or maybe it’s the rock star training. Either way, the devotion they inspire is amazing; for much of the audience this is their only gig of the year and they have been given the perfect opportunity to air their lungs.

Although a slick polished affair, there’s a glitch during Princess in China. The VT of Rihanna’s vocals comes in late warranting a restart. There’s also a problem with the stewards allowing too many people into the reserved area, causing some overcrowding – but that’s an Arsenal issue.

Although Coldplay’s melodic pop rock can be rather plodding, show-wise it was faultless. A stadium gig needs to be an event and the Mylo Xyloto tour, with its vast dystopian neon set, has set a new benchmark. Mass appeal pop music lives in the stadium, and Coldplay are the best at it. The Jubilee celebrations and even the running and jumping have some hard work to do to surpass this magnificent show.

Tickets for Coldplay at the Emirates Stadium 2 June and 4 June are still available through Seetickets and other outlets.

Updated 4 June to include Fix You in the set list.