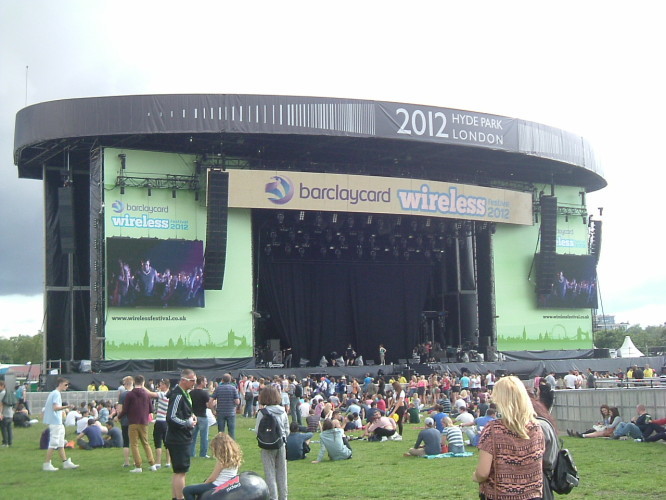 Deadmau5 brought the opening day of a dry Wireless 2012 to a pounding climax, for the launch of Hyde Park’s phenomenal series of summer music events.

The EDM megastar played a marathon two hour set to one of the friendliest and excited festival crowds we have seen, following jaw dropping sets from Childish Gambino and Santigold.

Wireless may not be the cool festival of choice – its relentless corporate branding sees to that – but while the electro elite endured shameful organisation at Bloc, Wireless’s pop fans danced in a sun-kissed carnival atmosphere.

While it was a predominantly young crowd it was far from childish, rather groups of friends basked in the crunching beats pummeling out of every tent. It’s a festival of music fans in its simplest form, there to dance and see their chart heroes live. And unlike more ‘credible’ festivals there wasn’t a fairground, quirky parlour games or mind enhancing visuals to distract from the delivery of exceptional music.

Launching the day’s music in spectacular form was Childish Gambino, whose fierce rapping with a full live band, including a violinist, energises the arm waving crowd with ease. His ground trembling bass and tribal drumming during a phenomenal take on Adele’s Rolling In The Deep, enveloped the tent creating an atmosphere of stomping brilliance, only cut by the band's scissor kicks. Gambino manages to master the balance of pop appeal and grinding credibility which marks him as a rapper in his own right, not just a comedian who raps.

On the same stage Santigold, flanked by dancers as regimented as Public Enemy’s S1W, proved Lights Out and L.E.S Artistes are timeless masterpieces and The Keepers is a majestic anthem. She is spellbindingly cool as she was draped in a sparkly cape and dragged around the stage while still singing with the attitude of a ninja fighting femme fatale. There’s also a 30 strong stage invasion before a giant white pantomime horse danced on stage.

The previous day's relentless weather had taken its toll on the Barclaycard Unwind stage. A quarter of the tent was a quagmire which attracted discarded beer cups and a burst beach ball. However, cramming into the available space for Arabmuzic was briefly worth the jostling. He plays snyth-pads like a pianist, his throbbing EDM being played live rather than merely setting off pre-programmed sequencers. The novelty soon wears thin though, as with watching a DJ scratcher or beatboxer. Yes the skills are there, but it doesn’t make up for the lack of musicality.

Unfortunately Afrojack on the main stage was nothing to do with the 80s dance craze Jackin’, he’s merely a wedding DJ booked by accident. “Is everybody alright” he shouts out as he slowly fades his mixer in and out. “You having a good time” comes next while he plays the derivative dance peddled in provincial Zanzibar discotheques on ladies are free night, but without the Jägerbombs for a quid. They’re £3.50 here, nah.

This is the problem with a lot of current EDM; a lot of it’s, well, crap. Zedd and Zeds Dead, two different people apparently, play nothing but a predictable order of screech, 4/4 pound, dub-steppy bit, screech 4/4... But the kids seem to love it; as psychology student Jen told us, “a lot don’t seem to know the difference. There were 14-year-old kids in a mosh pit to Feed Me, it’s crazy”. Knife Party, however, redeems the genre, with a powerful set of pulsating beats, DnB breaks and genuine sub wobbles.

The day of course belongs to Deadmau5. His bristling techno is genuinely exciting. He’s managed to make a dance show feel rock n roll. Often dance acts blur their tracks, but Deadmau5 gives each track an identity though juxtaposing styles and specific light and animation choreography. The stage show is captivating, giant cubes dance over the stage, providing a frame for spectacular graphics, and the infamous helmet changes personality from Anonymous to a cool dude in shades.

The light show isn’t as good as Amon Tobin’s Isam, but it beats The Shard’s silly string and devil eyes hands down. A main let down was the daylight. Hyde Park’s early curfew means headline acts play in daylight, severely diminishing the impact of acts reliant on night.

Wireless has its failings, in particular its controlled atmosphere and shameless branding, but this equates with organisation. It felt safe, stages were accessible and the line-up was all inclusive, unlike the disaster of Bloc. It felt rather sparse, two huge bars being closed highlighting it was far from sold out – but when Rihanna appears beers will no doubt need to be airlifted in. Wireless isn’t cool, it’s a mainstream pop festival for grownups and they have been catered for perfectly.