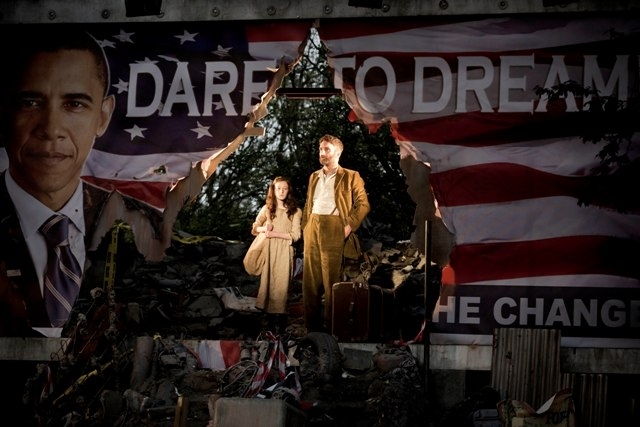 The scale of the Coming-To-America migration musical Ragtime is epic, so grandiose, so richly populated with cast that when it opened in 1998, the production budget was $11 million and two adjacent Broadway theatres were combined into one just to contain it.

The inventive team at Regent’s Park never fights shy of a challenge: their magical twig-and-twine four-tier set for Into the Woods and the massive glamorously-costumed ensemble tap dancing its way across the frequently rain-slicked stage in Crazy For You pay tribute to their resourcefulness in staging a "big" musical.

They’re also banking on its commercial success – unusually this year the season isn’t segmented into four, and just two productions (the other is A Midsummer Night’s Dream) run right across the programme from May to September. That’s longer than Ragtime managed in its critically-acclaimed New York revival in 2009.

Ragtime tells the overlapping stories of an aspirational family in New Rochelle, NY and the interlacing of their community with arrivals of Latvian Jews and African Americans: it’s usually performed in the period costume of 1906 on a stage teeming with characters in suffragette hats or britches like a boatload of extras from Titanic. Just as well the potato famine was half a century earlier or we’d have had the Irish on board too, and had to mix fiddley gigs in with the cakewalks, gospel and piano rags which punctuate Stephen Flaherty’s excitingly brassy and anthemic score.

In "Woods", director Timothy Sheader re-imagined the story through the eyes of a runaway child, and added a layer of perspective to a well-known show.  Here he has chosen a modern post-Obama scrapheap from which the actors only gradually adopt their period personas and maybe you’ll feel it makes the already complex story a fraction less accessible: an opacity further complicated by some gender-blind and racially-blind casting which we found surreal in a show largely about the contemporary politics of gender and race.

Perhaps he should have heeded the advice of his own leading lady in Ragtime Rosalie Craig, magnificent throughout and electric in her 11 o’clock number "You Can Never Go Back to Before", since Sheader's repeated theatrical device is a ‘marmite’ which threatens to divide audiences. If it irks you, you really need to abandon your irritation early to thoroughly enjoy the production.

But there is an enormous amount to enjoy: the cast are universally fine, you cannot fail to be uplifted by the music, and by their energy and commitment in Javier de Frutos’ choreography which stays truer to the original Vaudeville concept.

And that torn poster of Barack Obama overlooking the whole proceedings? If it bothers you, just thank your lucky stars it isn’t George Bush.

Ragtime continues at The Open Air Theatre Regent’s Park alternate weeks until September 8.  Schedule here. Tickets here.  Look out for the £20.12 ticket offers for bookings in July and August.