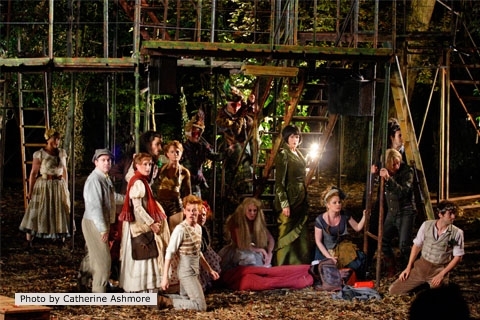 Baby boom children were regaled with the story that Princess Elizabeth had been informed of her father King George VI’s death at the exclusive ‘Treetops’ game lodge in the Aberdares national park of Kenya. Forty years later it turned out to be an arthritically creaking wooden assembly on stilts facing a rain-sodden pit of mulched foliage to which, at sunset, drifted a random collection of forest-floor wildlife.

Soutra Gilmour’s rickety stick-ety four tier set evokes the same image as the cast creeps out of the undergrowth to launch Into the Woods in a blindingly obvious setting that has somehow taken the Regent’s Park Open Air Theatre twenty years to realise but in Timothy Sheader’s gloriously detailed production comes close to a perfect match.

The folklore’s as tangled as the branches overhanging the stage: half a dozen Perrault or Grimm fairytales are Magimixed with an original story about a childless baker and his wife, cursed by a witch and ultimately redeemed in a messily-written second act with a crude motif about everyone needing other people, outing Sondheim as the mawkishly sentimental sap he really is.

The fine cast, strong singing and excellent orchestrations under the enthusiastic baton of Gareth Valentine drive the show, but on a long wet evening, you’re uncomfortably aware that Sondheim threw one too many plots into the blender, and that despite the intriguing cadences, too few of the musical snatches mutate into actual songs.

In such a polynuclear script, there are some brilliant turns: Hannah Waddingham first and foremost as possibly the best Witch yet seen in the role: enjoying the crippled disfigurement and working it like Anthony Sher’s three-legged Richard III, then transformed into a page-boy-bobbed vamp disturbingly reminiscent of Fenella Fielding in ‘Carry On Screaming’, but singing throughout with such clarity and distinction it’s like hearing the material for the first time: ‘Stay With Me’ and ‘Children Will Listen’ both quite outstanding.

Not far behind come Jenna Russell, one of the cleverest Sondheim interpreters as she showed in the recent Sondheim Prom at the Albert Hall, as a sardonic and abrasive Baker’s Wife, and Helen Dallimore equally splendid as an unconventionally tetchy Cinderella with consummate phrasing in ‘On the Steps of the Palace’. It’s harder to warm to Beverley Rudd‘s scene-stealing chavvy Red Riding Hood since she seems directly derived from Suzanne Toase’s clever characterization in the 2007 ROH/Linbury production.

Michael Xavier and Simon Thomas make a pair of preeningly self-absorbed princes, complete with drainpipe leggings and Russell Brand hairpieces, Xavier particularly strong in partnership with Jenna Russell in ‘Any Moment’. It’s also refreshing to see the minor role of Jack’s Mother played by someone who is both an experienced comedienne and a fine singer, Marilyn Cutts (from Fascinating Aida) appropriately wearing a carpenter’s tool belt and nailing this part totally.

In such an exposed setting, you wonder how they’ll ‘manage’ the magic - a beanstalk must appear, a wolf devour a grandmother, a giant tramples the world underfoot and there’s a transformation scene as challenging as any pantomime  suffice it to say that this is where the director and designer’s ingenuity come into their own, and all the devices - particularly the appearances of the giant voiced by Judi Dench in what you could call Dame Ex Machina, are cracking.

Into The Woods continues at Regent's Park Open Air Theatre until September 11, Monday-Saturday at 8pm and matinees on Thursdays and Saturdays at 2.30pm. Runs 2 hours 50 minutes. Only the severest weather causes cancellations. All seats in the lower tier and half-way up the upper section (which has no armrests) are now £42.50, some 'premium seats' £50, although cheaper tickets from £22.50 are available. Box Office 0844 826 4242 (24 hours, £1 booking fee) or online here. Much of the action takes place on the upper part of the set, so higher seating has good views. Plenty of quality food and drink options within the theatre enclosure, open from 90 minutes before showtime.